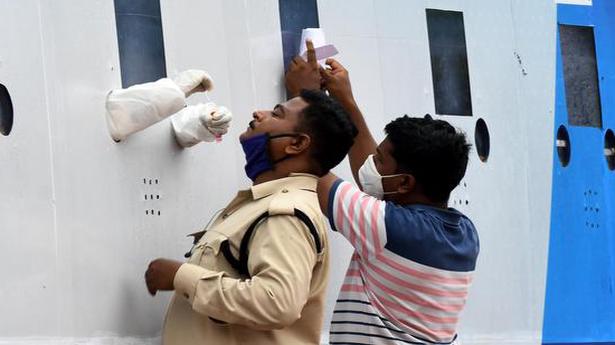 A select list of stories to read before you start your day.

The World Health Organization (WHO) is reviewing a report urging it to update guidance on the novel coronavirus after more than 200 scientists, in a letter to the health agency, outlined evidence the virus can spread in tiny airborne particles.

The government must not agree to de-escalate the situation at the Line of Actual Control (LAC) in Ladakh without an agreement on returning to “status quo ante” or the situation before the stand-off began, said experts, who pointed to the outcome of the Doklam stand-off in 2017 as a marker.

At least 1.4 lakh poor rural households have already completed their quota of 100 days of work under MGNREGA in the first three months of the year, and will not be eligible for further benefits under the rural employment guarantee scheme for the rest of the year. Another seven lakh households have completed 80 days and are on the verge of running out of work as well, according to the scheme’s database.

President Donald Trump said on Monday that U.S. schools must open in the fall – a decision over which he has limited power – as governors struggle with a nationwide rise in coronavirus infections and states reverse and pause attempts to reopen.

An Iraqi analyst who was a leading expert on the Islamic State and other armed groups was shot dead in Baghdad after receiving threats from Iran-backed militias. Gunmen on a motorcycle opened fire on Hisham al-Hashimi, 47, outside his home in the Zeyouneh area of Baghdad on Monday, a family member said, speaking on condition of anonymity for security reasons. The family member heard five shots fired.

After recording 4,000-plus cases a day for four consecutive days, Tamil Nadu reported 3,827 new cases of COVID-19 on Monday. Though the State saw a marginal dip in the number of new infections, the rise in COVID-19 cases continued in many districts, with all 37 districts reporting new cases.

Maharashtra recorded another big spike of 5,368 fresh coronavirus cases on Monday, taking the State’s total case tally to 2,11,987. A sharp fatality surge of 204 new deaths pushed the death toll to 9,026.

The Centre is reviewing about 50 investment proposals involving Chinese companies under a new screening policy, three sources familiar with the matter told Reuters.

Craning over a wooden frame, Yousuf Khan, billed as the oldest zardozi craftsperson of the Nadeem Road here, nimbly weaves metallic threads into a cotton cloth stretched across it. But suddenly overcome with sombreness, his right hand, which is deftly gripping a needle, quivers to a halt. This is his first assignment after the lockdown eased a month ago. But as it concluded in two hours, he will be left without work once again.

Like most people his age, Ramanathan Krishnan, 83, isn’t venturing out, even casually, due to COVID-19. “Just like anybody else in the world, I am sitting at home, watching television and movies. Due to my age, I can’t afford to go out. I hope things get better soon as everybody is getting fed up,” he told The Hindu.