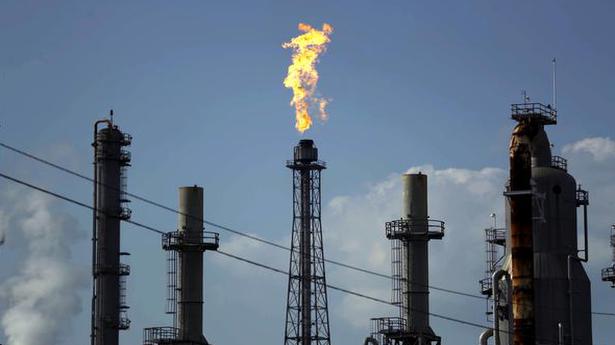 Negative prices mean sellers have to pay buyers to get rid of their crude, an unprecedented situation even in the volatile oil market.

Story so far: Prices of West Texas Intermediate (WTI), the American benchmark for crude oil, fell to less than zero in Monday’s trade. The price of a barrel of WTI fell to minus, yes, that’s right, minus $37.63 a barrel. What this means is that sellers have to pay buyers to get rid of their crude! This is unprecedented in the oil market, even accounting for its notoriety for being volatile.

We need to understand a bit of oil market and trading dynamics here. WTI oil is traded as futures contracts in the NYMEX (New York Mercantile Exchange) where traders buy and sell monthly futures such as, for instance, May futures, June futures and so on. The sellers of such futures will have to deliver a barrel of crude oil at the contracted price in the contracted month just as buyers will have to take delivery at the contracted date.

What happened on Monday was that speculators who had taken large bets on May futures began to unwind their “positions”. This was because the futures contracts are set to expire today, Tuesday. Those not intending to take physical delivery have to square off their contracts before the expiry date. So, speculators who did not want to take delivery in May proceeded to unwind their “positions,” leading to the massive fall in prices.

It could be that these were financial speculators who never take physical delivery and hence closed their contracts. Or, these could also be delivery-based traders backing out as the bottom has fallen off demand for oil. In reality, it would be a combination of both categories of traders. The bottomline, though ,is that prices fell as demand for oil is falling and the world, especially America, is running out of storage space.

This could be due to two reasons. Traders expect demand to recover by June as lockdowns are lifted across the world and economic activity resumes. Second, traders also expect that storage space may be created as existing inventory is drawn down. America is also talking of adding to their strategic storage by taking advantage of the low prices. This could create demand for oil. Finally, contract expiry for June contracts is still a few weeks away, giving speculators that much more time to speculate.

Market reports talk about contango trades in the oil market. What do they mean?

Simply put, contango kicks in when prices of a commodity in the futures market are considerably higher for deliveries many months later, compared to prices for immediate delivery. For instance, while May oil futures are negative and June is at $20.43 a barrel, November futures for the same grade of oil ended at a hefty $31.66 a barrel on Monday. Contango trades happen when traders anticipate a surge or rise in demand and hence value the commodity higher for the future.

So, why can’t traders buy cheap oil now and store them for release in future when demand and prices rise?

That’s exactly what traders are now doing. Such a practice became famous during Iraq’s invasion of Kuwait in 1990 when a trader took massive positions at cheap prices ahead of the invasion and sold them when prices rose after the invasion. Oil was stored in tankers floating on the sea and unloaded at considerably higher prices.

Traders are doing the same now. Year-long hiring contracts for VLCC (very large crude carriers) that can store up to 2 million barrels of oil are soaring through the roof. According to a report in the Wall Street Journal, VLCC hiring charges for year-long contracts are now at $72,500 a day, compared to $30,500 a day a year ago.

This shows rising demand for such floating storage to take advantage of low prices now. These tankers are moored off the South African coast, which is equidistant to the American and Asian markets. But the problem is that such floating storage is also fast running out of capacity; land storage in America is already overflowing. This would explain why oil prices are falling without support. According to some estimates, over 140 million barrels of oil are now floating in the high seas. The world consumed, at its heyday, about 90 million barrels of oil a day. This should now be considerably lower.

The prices of Brent grade are still at $25.70 a barrel for May futures. What’s the reason for the difference?

Brent oil has traditionally quoted higher than WTI, with the gulf being about $6-7 a barrel between the two. Brent is a superior grade produced in the North Sea off the British coast and is the accepted benchmark for this part of the world. The market that it serves is considerably larger than that of the United States and demand is, therefore, higher. Transporting oil from the U.S. to Asia is not economical, thus limiting the scope for the WTI grade. Refineries in Europe are configured for Brent, rather than WTI. Prices of Brent are, therefore, always higher than those of WTI.

How is India benefiting from this price crash?

In two ways. First, the oil import bill will fall sharply this fiscal year, giving tremendous relief to the government on the external account front. With merchandise exports from India badly hit due to the lockdown in the West, foreign exchange earnings are under pressure. With oil prices falling and foreign exchange outgo reducing, the pressure on the current account balance is off. In fact, we may be looking at a positive balance in the current account if global economic recovery is quick and our exports recover.

Second, India is quietly building up its strategic reserves, taking advantage of the cheap prices. India has a capacity to hold over 39 million barrels of oil at its strategic reserves in Vishakhapatnam, Mangalore and Padur, near Udupi. These are underground salt caverns converted and built to store crude oil. The strategic storage capacity is now being increased even as the existing caverns are being filled.