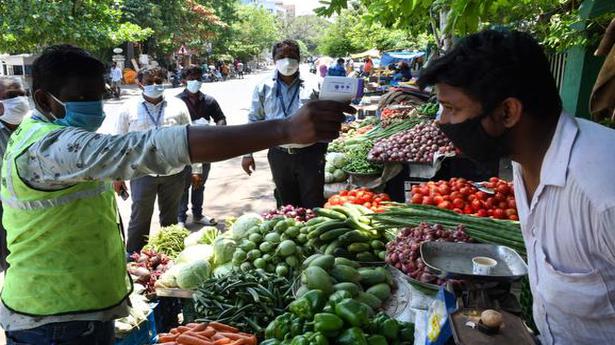 India accounts for over 5% of the world’s cases and 3% of fatalities; testing still not enough relative to the outbreak size

India’s COVID-19 cases crossed the 5 lakh mark on Friday. In the five-month period after the first case was recorded on January 30, infections and fatalities have spiralled upwards, but the testing rate, which is measured as ‘tests per confirmed cases’, has consistently come down.

As of June 26, India accounted for over 5% of the world’s cases and 3% of fatalities. Even after the total number of cases crossed the 5 lakh mark, cases are doubling every 19.5 days. The number of average new cases recorded per day has quickly increased to over 16,300 from nearly 10,400 a fortnight ago. Fatalities recorded everyday have gone up in the last month.

Doubling time is the estimated number of days it takes for cases to double in a region. Case fatality rate = Deaths/cases.

Also read: How do States fare on reporting COVID-19 data?

As of Friday, nearly 80 lakh tests were conducted in India with the average number of daily tests hovering around the 2 lakh mark lately. However, India is conducting only over 15 tests per confirmed case, half of the over 30 tests per confirmed case it was conducting in March. While there is an increase in the number of tests, testing is still not enough relative to the outbreak size

Tests per case is an important parameter to track a region’s response. Despite successfully controlling the pandemic, South Korea continues to conduct over 250 tests per confirmed case. The figure is high for most nations which flattened the COVID-19 curve.

In the first week of May, only nine States had more than 1,000 cases. At the end of June, 24 States reached that figure. Eight of those 24 States are conducting fewer than 30 tests per confirmed case. These States are not testing enough.