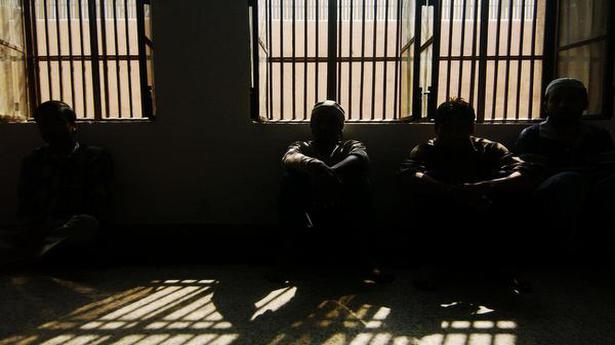 Prisons in Uttar Pradesh were the most overcrowded, while Sikkim registered the highest relative increase in inmate population since 2014.

Data from newspaper reports also show that the number of prisoners found to be COVID-19 positive (at least 2,191 such inmates) was higher in prisons in States with high occupancy rates.

The table depicts the number of inmates found positive for COVID-19 in a select list of jails*.

The chart depicts the occupancy rate (%) (inmate population/capacity) of prisons in India between 2014 and 2018. For a sanctioned capacity of 100 inmates, jails in India had 118 prisoners in 2018.

The chart plots the occupancy rate of prisons in 2018 against its change from 2014 across States. Each circle depicts a State. While prisons in Uttar Pradesh were the most overcrowded in 2018, jails in 18 States (red circles) had exceeded their capacity.

*Note: The number of inmates who have tested positive is a conservative estimate based on information collated from The Hindu news reports and reports from news agencies such as PTI and ANI.