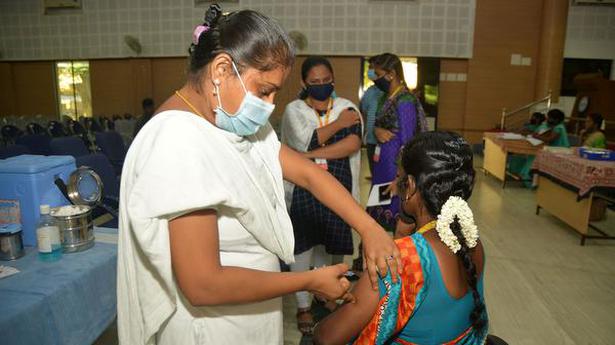 Union Minister G. Kishan Reddy on Sunday reiterated the government’s promise of vaccinating everyone by December this year under the COVID-19 vaccination programme.

As of Monday morning, the country had administered 68,75,41,762 vaccine doses, according to the data available on Union Health Ministry’s website.

You can track coronavirus cases, deaths and testing rates at the national and State levels here. A list of State Helpline numbers is available as well.

Here are the latest developments:

Prime Minister Narendra Modi on Monday said India is administering 1.25 crore Covid vaccines daily which is higher than the population of several countries.

Modi said Himachal Pradesh has become a champion by being the first state to administer the first dose of Covid vaccine to all eligible people despite logistic difficulties.

Sikkim and Dadra and Nagar Haveli too have achieved this target, he said.

The prolonged closure of primary and upper primary schools during the pandemic months has led to “catastrophic consequences” for school students, particularly in rural India, says an emergency report.

Based on the School Children’s Online and Offline Learning (SCHOOL) survey conducted by researchers, who worked in coordination with eminent economist Jean Dreze, the ‘Emergency Report on School Education’ says that only 8% of school students in rural India have been able to access online education, while at least 37% have stopped studying altogether.

The survey also found that the Dalit and Adivasi children were at a greater disadvantage as a mere 5% of the children from these groups had access to online classes.

80% COVID-19 immunity lost in 6 months in some after Pfizer shot: study

COVID-19 antibodies produced by the Pfizer vaccine decreased more than 80% in senior nursing home residents and their caregivers six months after receiving their second dose, a U.S. study has found.

The research led by Case Western Reserve University and Brown University in the US studied blood samples of 120 nursing home residents and 92 health care workers.

The researchers particularly looked at humoral immunity — also called antibody-mediated immunity — to measure the body’s defences against the SARS-CoV-2 virus, which causes COVID-19.

At least 30 inmates of Viyyur Central Prison have been tested positive for COVID-19, according to an unofficial report.

One of the positive inmates has been admitted to Thrissur Government Medical College Hospital as his conduction turned critical. Others were shifted to the COVID first-line treatment centre functioning in the jail compound.

Based on the observation of attendance and incidence of COVID-19 infection among students of Classes IX to XII and teachers for eight days (classes began at the start of this month), a call will be taken by Chief Minister M.K. Stalin on starting offline lessons for students of other classes, Mr. Poyyamozhi said.

Low rate of infection alone is no reason to celebrate: Experts

Although North Karnataka districts are consistently showing a low rate of infection over the last few days, the low vaccination rate and low seroprevalence in these districts indicate that it is premature to celebrate, say experts.

Districts like Bidar, Haveri, Kalaburagi, Raichur, Yadgir, Bagalkot and Vijayapura in North Karnataka have either been reporting new cases in single digits or zero cases for the last week. These districts have also recorded among the lowest second dose coverage in the State as well as the lowest seroprevalence.

Public health experts say it is important to take into account vaccination coverage and seroprevalence in the area, besides deaths due to COVID-19 and hospital bed occupancy.

Hospitals in the heart of California’s Central Valley are running out of beds in their intensive care units, state officials announced Friday, as a more contagious version of the coronavirus continues to spread primarily among the unvaccinated population.

If the problem gets worse and ICU capacity falls to zero, the State says hospitals across California must also accept transfer patients.

Govt determined to vaccinate everyone by December: Kishan Reddy

The Government of India is determined to vaccinate everyone by December this year under the COVID-19 vaccination programme, Union Minister G. Kishan Reddy said on Sunday.

The government under the leadership of Prime Minister Narendra Modi is running the world’s biggest vaccination programme and have till date vaccinated 69 crore people free of cost, which is a major accomplishment by itself, the Union Culture and Tourism Minister said, according to a release.

“We want to reach out to the last person to be vaccinated in the country, in the most remotest part by December this year. It is also a matter of great pride that India was one of the two countries which invented a vaccine for COVID, besides USA, this raised the stature of Indian scientists and the country in the world,” the release quoted Mr. Reddy as saying.

Appealing to parties to stop playing politics over COVID-19, Maharashtra Chief Minister Uddhav Thackeray on Sunday said ‘agitations’ must be directed at preventing the recurrence of a third wave and not for reopening of temples which would only serve to spread the virus.

Warning the public against letting down the guard, Mr. Thackeray reminded citizens that there was a surge in cases after festivities last year during the same time.

“The Ganesha festival is round the corner. But one must not be complacent and remember that there was a big spike in cases after festivities last year. So, I request all of you to avoid crowding and strictly follow pandemic norms like wearing face masks even after vaccination,” said the Chief Minister, adding that even if the third wave did strike, the aim should be to be one step ahead and focus on how to lessen the intensity.

The Mizoram government has extended partial lockdown in Aizawl Municipal Corporation (AMC) area and certain COVID-related restrictions in other parts of the state till September 18, with a few relaxations in the curbs, an official said on Sunday.

An order related to the COVID curbs was issued as the restrictions, imposed on August 20, were in place till Saturday, he said.

Educational institutes have not been allowed to reopen in AMC area, while schools and colleges in COVID-free localities in other parts of the state were permitted to resume physical classes.

The Goa government on Sunday extended the coronavirus-induced curfew till September 13.

In a notification issued here, the state administration announced the extension of the curfew till 7 am on September 13.

“As part of the curfew, the state government has retained the restrictions that are currently in force,” a senior official said.

COVID-19 cases in Dharwad medical college go up to 182