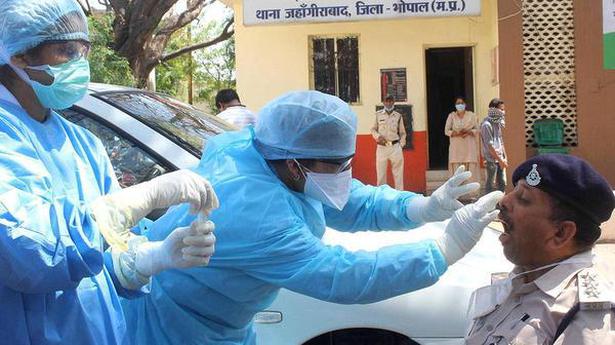 India’s total tests for detection of COVID-19 has reached over 6.6 crore and tests per million have risen to 48,028 as on date with the national cumulative positivity rate being recorded at 8.52%, the Union health ministry said on Wednesday.

“A high level of testing leads to early identification of positive cases. As evidence has revealed, eventually the positivity rate will fall. The national cumulative positivity rate is 8.52% and tests per million stand at 48,028 today,” it said.

A total of 83,347 new infections have been reported in 24 hours, the ministry said, underscoring that 74 per cent of the new cases are concentrated in 10 states and Union Territories — Maharashtra, Andhra Pradesh, Karnataka, Uttar Pradesh, Tamil Nadu, Odisha, Kerala, Delhi, West Bengal and Chhattisgarh.

Maharashtra alone has contributed more than 18,000 cases followed by Andhra Pradesh and Karnataka with over 7,000 and 6,000 cases respectively, it said.

Also, 1,085 deaths due to COVID-19 have been registered in a day with 10 states and UTs — Maharashtra, Karnataka, Uttar Pradesh, Tamil Nadu, Punjab, West Bengal, Andhra Pradesh, Delhi, Haryana and Chhattisgarh — accounting for 83% of the new fatalities.

Maharashtra reported 392 deaths followed by Karnataka and Uttar Pradesh with 83 and 77 deaths respectively.

You’re all alive because of PM Modi: Bihar Minister asserts in viral video