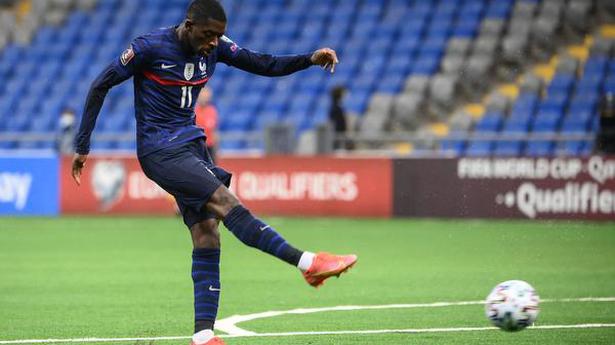 France, England, Germany and Italy all head their groups after victories in World Cup qualifying on Sunday while Spain left it late to win in Georgia and Denmark smashed eight past Moldova.

World champion France got its first win of the campaign by beating Kazakhstan 2-0 in Nur-Sultan after a stuttering start to qualifying with Wednesday’s 1-1 draw at home to Ukraine.

Forward Ousmane Dembele broke the deadlock in the 20th minute with a right-foot shot after being set up by Anthony Martial following a defence-splitting pass from Paul Pogba. Les Bleus doubled the lead on the stroke of halftime when Sergiy Maliy headed a cross into his own net.

France moved top of the Group D standings with four points, two ahead of Finland and Ukraine who drew 1-1 in Kiev.

It was a more nervous affair for Spain which needed a stoppage time goal from halftime substitute Dani Olmo to grab a 2-1 win away to Georgia in Group B.

Harry Kane scored his first England goal since 2019 to lead his side to a comfortable 2-0 win against Albania in Group I. Midfielder Mason Mount scored the other goal.

England is on top with six points from two games before its clash with Poland on Wednesday.

The Poles are on four points after beating Andorra 3-0 with Robert Lewandowski on target again, with two goals. However, the prolific forward was ruled out of the England match because of a right knee injury.

Hungary is also on four points after winning 3-0 in San Marino.

Germany maintained its perfect start after an early Serge Gnabry goal gave it a 1-0 win over Romania in Group J. Armenia is level on six points with Germany after an impressive 2-0 win over Iceland.

Italy tops Group C with maximum points after Andrea Belotti and Manuel Locatelli secured a 2-0 win over Bulgaria in Sofia.

The Azzurri are ahead of Switzerland on goal difference after Xherdan Shaqiri’s second minute strike was enough for a 1-0 win over Lithuania in St Gallen.

Denmark leads Group F with six points from its opening two games and a handsome plus 10 goal difference after crushing Moldova 8-0, its record win in major tournament qualifying.

Last wild macaw in Rio is lonely and looking for love