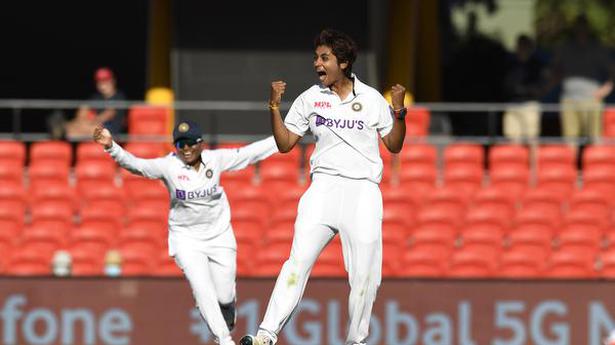 Mithali Raj believes India has several positives to take away from the two Tests the team has played this year.

If India was in control right from the opening hour of the historic Day-Night Test, which ended at Carrara on Sunday, it had staged a gritty fightback against England in June after being forced to follow-on.

“We were on the verge of losing to England, but the lower-order put on great partnerships,” said Mithali. “Sneh Rana, Taniya Bhatia and Deepti Sharma did well in England. (Here) Smriti played well; her hundred was fabulous. All our seamers bowled well too.”

She lauded the great effort from the 38-year-old bowling spearhead Jhulan Goswami.

“She has been in very good rhythm,” said the captain. “Along with her, the two young seamers (Meghna Singh and Pooja Vastrakar) have really stood up.”

About changing her call at the last minute at the toss, she said, with a smile: “I didn’t want losing the toss (regularly) to be my legacy. The girls have been pulling my leg about it.”

Even that last-minute change didn’t help, though. She lost the toss again, though the Indian batting, led by Smriti and Shafali Verma, ensured it didn’t matter at all.

“I think I need to take a cue from M.S. Dhoni about winning the toss,” said Mithali.

Australia coach Matthew Mott said he had the highest praise for the Indian attack. “Goswami, to me, is the ultimate professional, a world class bowler,” he said. “Every time she wasn’t bowling, I was pretty happy.”