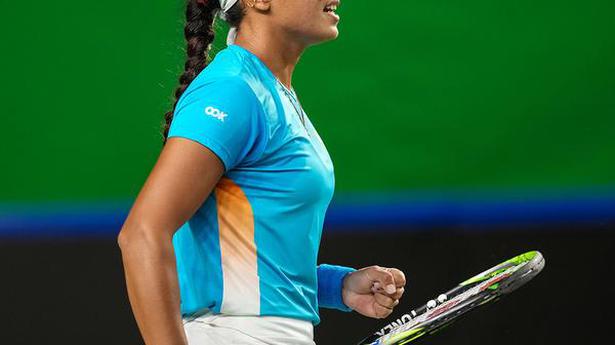 The health of Indian women’s tennis has often been reflective of Ankita Raina’s game, especially in the Billie Jean King Cup. It is no surprise that the 28-year-old Ankita played the best tennis of her career, in the World Group play-off tie against Latvia in Jurmala.

Chatting with Olympian Vishnu Vardhan on Instagram, Ankita, along with teammate Rutuja Bhosale, raved about the enriching experience of the ‘historic tie’.

Historic because India reached this stage of the Cup for first time ever. It was an inspiring performance by Ankita, as she tormented former World No. 5 and French Open champion Jelena Ostapenko, before letting her escape to victory.

A win, very much possible as Ostapenko served to stay in the match at 4-5 in the decider, would have catapulted Indian women’s tennis to a different sphere. Ankita put things in perspective.

“During crucial points or games, they played very solid and produced the winners. That is the reason why they are, where they are,” said Ankita.

Ankita also had an opportunity to extend the fight against former world No. 11 Anastasija Sevastova.

“There is so much to learn.

“It was a great experience,” said Ankita.

Sania Mirza has been a beacon for Indian women’s tennis with six Grand Slam titles, world No. 1 in doubles for long and reaching a career best No. 27 in singles and multiple Asian Games medals.

Both Ankita and Rutuja, who paired up with debutant Zeel Desai to record a morale boosting doubles victory in the dead rubber against Latvia, heartily acknowledged Sania’s splendid role.

“When I got into the team in 2013 as a 16-year-old, I was in awe of Sania. I still feel the same. When Ankita and Karman were playing, Sania used to explain things to us on the sidelines,” said Rutuja.