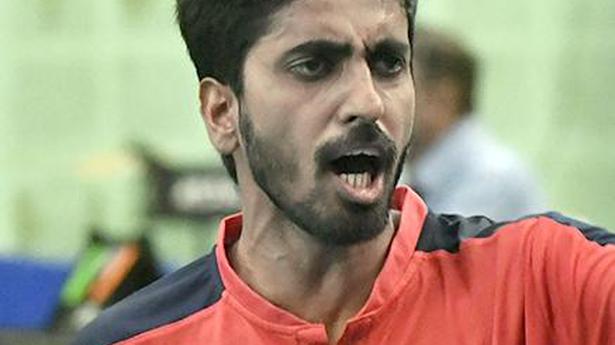 G. Sathiyan has started preparing with his sparring partner Anirban Ghosh at the Raman High Performance TT Centre here. For the next two months the Indian star paddler said he would be working on “small details” with the sole focus being to put up a better show in the Tokyo Olympics.

“The Sports Authority of India-Talent Olympic Podium Scheme (SAI-TOPS) has given whatever equipment I’ve asked for so that I keep up my level. I am a much better player than I was in the 2018 Commonwealth Games (CWG),” said Sathiyan, during a virtual press meet, organised by SAI-TOPS on Friday.

“That showed in my game in the National championships and Olympic qualifiers in Doha recently. I’ve gained a lot of confidence and am keen to put up a strong show in Tokyo and hopefully win a historic medal in the quadrennial event.”

Playing with an all-round player like Anirban would help him sharpen his game-skills, Sathiyan said. “I am focusing on things that are not my strengths like strokes that are powerful. I am also working on improving my serves and receives. And variations in pace during rallies. I am working seven hours a day with my coach S. Raman with two hours of fitness under the supervision of Ramji Srinivasan,” he said.

Sathiyan said he’s already asked SAI for a table (San-ei Absolute W Advanced) that is similar to the one to be used at the Tokyo Olympics. “I’ve already put that up with SAI-TOPS and I hope to get it soon,” he said.

According to the newly-crowned National champion, playing in pro-leagues in Poland and Japan helped him maintain his level. “It helped me to be in match-mode. I hope I can carry that momentum in Tokyo,” he said. The two-time Pro Tour champion assured he will unleash a “new flavour” of his game at the Olympics.