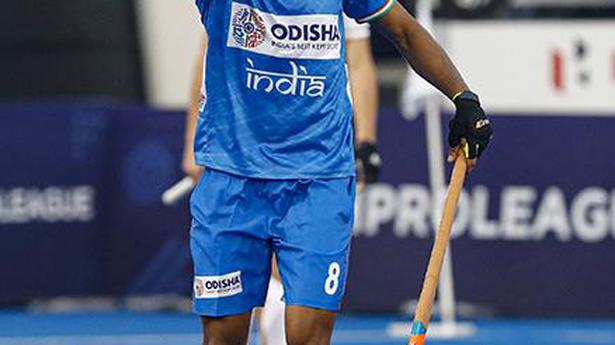 Midfielder feels that its important to keep the momentum going.

Following a successful tour of Argentina and Europe, Indian men’s hockey team midfielder Hardik Singh on Thursday said the national side needs to improve its finishing skills and work on the coordination to do well in the Olympics.

“I think we need to improve on our finishing. We should convert those chances we create in the opponent’s D. We can also work on our coordination, which would help us control the game against our opponents,” Hardik said in a release issued by Hockey India.

“We want to keep improving each and every day, and keep this momentum going by sticking to our daily training goals.”

Playing its first top international competition after a one-year hiatus, the Indian team won the first match via a penalty shoot-out, before registering a 3-0 win over host Argentina in the second game of the two-leg FIH pro league.

“The Argentina and Europe success are an outcome of high-intensity training, which we have been doing at the camp for one year,” he said.

“We trained in such a way that it has kept us in that competitive frame of mind throughout. We have been creating match situations in our training, which I feel has really helped us during our tour.”

The Indian team also secured 4-3, 4-4, 0-1 and 4-2 results in their practice matches, which they played against Argentina as a part of their preparations for the Olympic Games in July.

“This team has built that fighting spirit over the past few months, and that is one of the key reasons behind our successful Argentina as well as Europe tour. Moreover, we played as a unit, and that reflected on both the tours.”