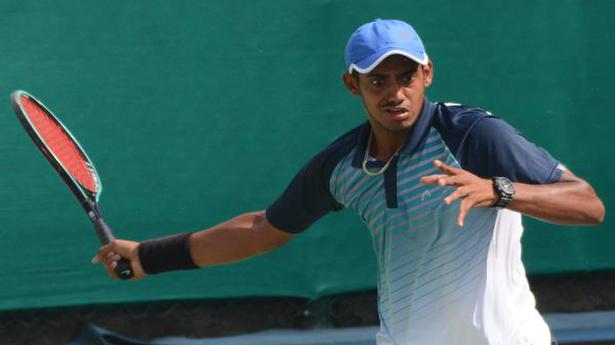 Karan Singh packed too many punches to outclass Rushil Khosla 6-1, 6-2 in the quarterfinals of the National junior tennis championship at the DLTA Complex here on Thursday.

The 18-year-old Karan who did well to gain four weeks of exposure in men’s events in Egypt recently, albeit mostly in the qualifying rounds, thumped his serves strong and hammered the forehand at will to bulldoze his way forward.

In the semifinals, Karan will challenge fellow trainee at the National Tennis Centre, and top seed Nishant Dabas who had to endure three sets to down Aayush Bhat.

Second seed Aman Dahiya dismissed the under-16 champion Daksh Prasad for the loss of one game, and will play Sandesh Kurale who got past third seed Denim Yadav for the loss of four games.

In the girls section, Anjali Rathi sailed past third seed Sanjana Sirimalla as she belted the ball on both the flanks with considerable precision and power. Anjali will face second seed Suhitha Maruri who was taken to three sets by Ruma Gaikaiwari.

The other semifinal will be between top seed Reshma Maruri and fourth seed Shruti Ahlawat.