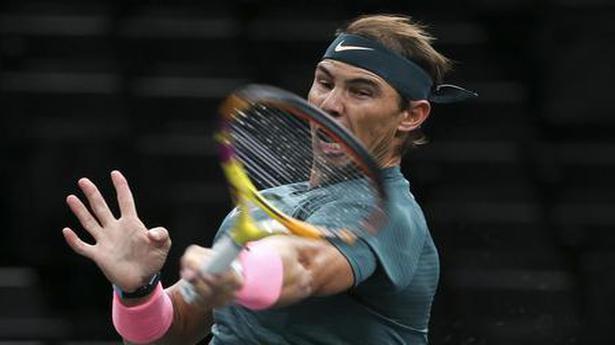 Nadal has won 86 career titles, including 35 in Masters events, but lost his only final at the Bercy Indoor Arena in Paris 13 years ago.

Top-seeded Rafael Nadal stayed on course for an elusive first title at the Paris Masters after beating Jordan Thompson 6-1, 7-6 (3) to reach the quarterfinals.

Nadal has won 86 career titles, including 35 in Masters events, but lost his only final at the Bercy Indoor Arena in Paris 13 years ago.

Thompson found his range in the second set, hitting a couple of big winners down the line and forcing a set point with Nadal serving at 6-5. After a decent second serve, Nadal saved it after a long rally.

“He played well, so I give credit to him. He started to change directions very well with the serve, hitting the right spots,” Nadal said.

“Then he’s super fast from the baseline, returning some very difficult balls.”

But Thompson threw his racket onto the ground in frustration after losing the next point and Nadal’s sharp backhand volley at the net took it into a tiebreaker.

The unseeded Australian saved one match point with his third ace of the tiebreaker, but on the next opportunity Nadal pushed his opponent to the back of the court and Thompson’s forehand sank into the net.

“He’s always improving … this year playing the semifinals again in New York (at the U.S. Open) and quarterfinals in Roland Garros,” Nadal said.

Still, Nadal holds a 6-0 lead in their meetings, having beaten him twice already this year.