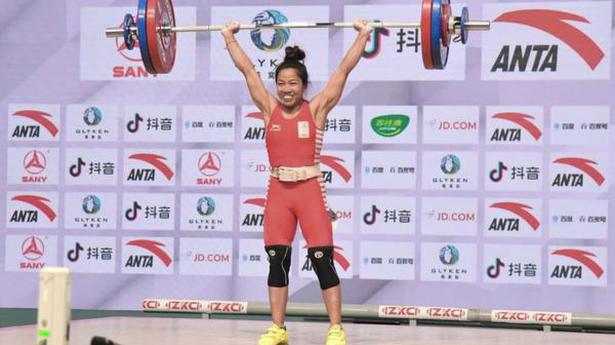 Amidst the pandemic-induced restrictions and uncertainties, weightlifter Mirabai Chanu’s plan to train in the USA to treat a shoulder issue, which is preventing her from realising her potential in snatch, is waiting for the go-ahead.

A strong medal prospect in women’s 49kg at the Tokyo Olympics, Mirabai achieved her personal best of 205kg to claim a bronze medal, along with a clean and jerk world record, in the recently-concluded Asian weightlifting championships in Tashkent.

However, her snatch attempt of 86kg, following two ‘no lifts’, was a cause for concern.

Even as travel restrictions are in place due to the pandemic, Mirabai — who got rid of a lower back issue after getting treated by physiotherapist Dr. Aaron Horschig in the USA last year — is keen to visit the country again.

“Sometimes my shoulder feels uncomfortable. That’s why I have planned to go to the USA. I have requested the Government for this, but it is not confirmed yet because of COVID,” Mirabai said at a virtual press conference, organised by Sports Authority of India, on Thursday.

“My best snatch effort is 88kg, but it is down a bit due to the shoulder issue. I am doing exercises and trying to rectify my technique to get better results.”

Mirabai, who was inducted into the Target Olympics Podium Scheme (TOPS) in November 2018 and has received a total funding of ₹51.51 lakh, sounded determined. “What I could not do in Rio, I will try to achieve in Tokyo. I try to replicate what I do in training and don’t take pressure.”

Even though she practises a power sport, Mirabai acknowledges the role of a psychologist in soothing her nerves.

“Sometimes the body gets dull, you don’t feel like training. If there is an injury or you don’t perform well, then you feel low. A psychologist advises, ‘If you fail today, you will succeed tomorrow.’

“After my failure in Rio, I was devastated. A psychologist told me the failure might have happened due to expectations in my first Olympics.

“Then I focused on my training again and everything became normal,” said Mirabai.