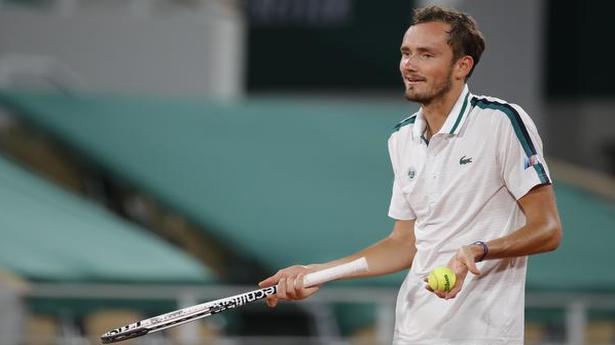 Daniil Medvedev’s campaign at Roland-Garros came to an end on Tuesday with an ill-judged underarm serve on match point followed by an impassioned outburst over his eagerly-awaited showdown with Stefanos Tsitsipas being played inside an empty stadium.

It was only Tsitsipas’s second win over Medvedev in eight meetings and it ended in bizarre fashion.

The mercurial Russian decided to serve underarm on match point down.

But as he approached the net, hoping to finish the point with a volley, Tsitsipas merely fired a backhand winner beyond him.

“I was thinking about this during the whole match, like that maybe in the important point I could do it because my opinion was that he was quite far back in the court, so that can always work,” explained the 25-year-old.

“I didn’t see the opportunity before but I thought it’s going to be a good choice to bring him surprise. I sometimes do it on practice.

“Usually guys are a bit surprised. But it didn’t work out at all. I won’t say it was a mistake. It was something that I dared to do and maybe next time I won’t do it knowing that he’s ready.”

Tsitsipas had his own description for the ploy which backfired so badly for his opponent.

“I saw he kind of stopped. I felt like there was something coming up, so at that point I think I got prepared for it.”

Medvedev had never won a match at Roland-Garros in four attempts before this year.

So winning four matches in one visit was progress even if he was dismayed that his match was selected for the penultimate evening session.

It was played inside an empty Court Philippe Chatrier as spectators were banned under a 9 p.m. COVID-19 curfew.

This year’s French Open is staging evening sessions for the first time under a broadcast agreement with streaming giant Amazon.

“It was without a doubt the match of the day but Roland-Garros preferred Amazon to people,” said Medvedev.