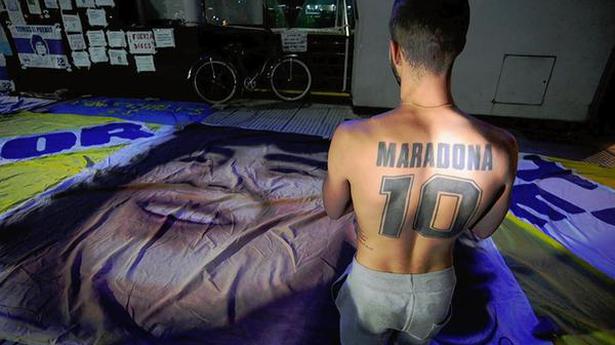 Doctors treating Argentine football legend Diego Maradona, who had a successful brain surgery to remove a blood clot, are “amazed” at the rate of his recovery, his physician said on Wednesday. Surgeons at a private clinic in Buenos Aires spent 80 minutes removing the clot on Tuesday night.

“I just saw him, he’s switched on, in a very good mood. We are amazed at how he’s healing,” said the doctor, Leopoldo Luque, who provided an update on the 60-year-old’s condition.

“But we have to be careful because we are still in the post-operative period,” he cautioned. “It is clear that he has no neurological complications,” said Luque, speaking to reporters through a mask. There are other parameters that we are waiting to evaluate, because it is still very early. But the recovery is excellent.”

The comments sparked loud cheering and chanting from fans of Maradona who have hung banners depicting his glory day outside the clinic.

World Cup winner Maradona had been taken to hospital in La Plata on Monday for a series of tests after feeling unwell.

A scan revealed the blood clot, and on Tuesday he was transferred to the clinic in a northern neighbourhood of the capital. “We managed to successfully remove the clot. Diego coped well with the surgery,” Luque said in an earlier update.

Maradona, who turned 60 on Friday, has suffered ill health before. He has survived two heart attacks, and also contracted hepatitis and undergone gastric bypass surgery.

“Diego, all the strength in the world. My family and I want to see you well as soon as possible,” said the Barcelona forward.