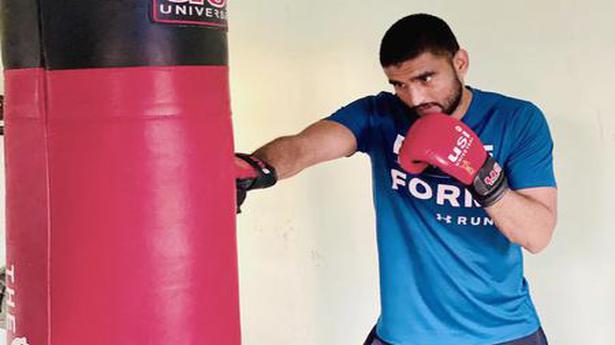 My next target is doing well in the Commonwealth Games and Asian Games next year,” said Manish.

After his Olympics debut in Tokyo, Manish Kaushik has returned to training at the Army Sports Institute in Pune with an aim to perform well in the Commonwealth Games and Asian Games next year.

Manish missed the Services selection trials for the National championships due to his post-Olympics engagements and could not make it to the World championships.

However, he wasted no time in getting back to training. “The Olympics was a good experience and I gave my best. My training was affected as I had COVID-19 two months before the Games.

“After the meeting with the Prime Minister on August 15, I went to Pune to train there for about a month and half. My next target is doing well in the Commonwealth Games and Asian Games next year,” Manish, who graced the National women’s championships here as a special guest on Monday, told The Hindu.

Manish said he would like to take part in both the Games even though the two would be held in quick succession.

“I know there is a small gap between the two events and it will be taxing. But I would like to participate in both if I don’t have any injury issues. There is enough time to prepare for the events. When the National camp starts, we will get to know whether we can get any exposure trips in the run-up.”

Manish is on a short break to attend a special function where Arjuna awardees of last year would be presented the trophies in Delhi on November 1. The event was held virtually due to COVID-19 last year.

‘Did not know if I would go on to play Test cricket again,’ says R. Ashwin 3 min read

‘Did not know if I would go on to play Test cricket again,’ says R. Ashwin