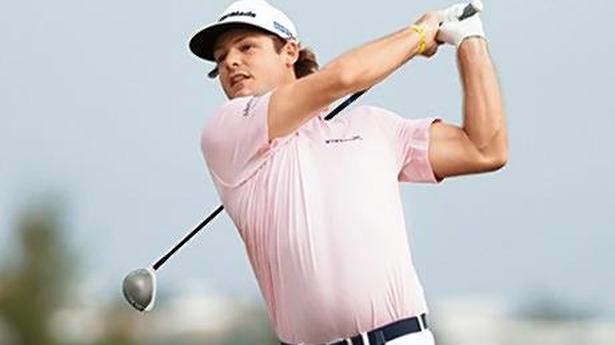 Also in contention is another former Asian Tour No. 1 Thailand’s Kiradech Aphibarnrat (69) at 7-under and in Tied-8th place.

Indian golfer Anirban Lahiri made a lot of birdies but also gave away a few shots to finish day three at Tied-11th in Bermuda Championship here. Yet he stayed within striking distance of the leaders.

On a day when winds gusted up to 40 kmph, Lahiri shot 2-under 69 despite a closing bogey in the second round.

Also in contention is another former Asian Tour No. 1 Thailand’s Kiradech Aphibarnrat (69) at 7-under and in Tied-8th place.

Former Asian Tour No. 1 Lahiri, who started the third day with a bogey also ended it with a bogey and in between on the ninth, he also had a double bogey. However, he has been making a lot of birdies. In the third round Lahiri made six birdies, taking his total to 15, equalling the most this week.

“I played quite well but managed to make enough mistakes. Felt like I was a bit loose and gave away two or three shots that I should not have.

“I’m happy with the way I struck the ball especially on the back nine which was playing harder today. Disappointed to finish with a bogey again. It leaves a bad taste in the mouth but that’s okay.”

Lahiri is playing in his sixth successive season on the PGA TOUR with a runner-up finish at the 2017 Memorial Tournament being his career best finish. He has not won a title worldwide since his win at home at the Hero Indian Open, after which he has been playing on the PGA Tour.

Tomorrow, my goal will be to keep a clean card and if I can minimize my errors, I feel I’m playing well enough to make a bunch of birdies and hopefully down the stretch give myself a chance.

“Everything after that is a bonus. Hopefully we can make some magic. Conditions will be better for scoring (in the final round). It’ll be interesting with the two-tee start as it won’t be much of a difference in terms of the course conditions as opposed to a one tee start.

“Tomorrow everyone will play in a two-hour window and conditions will be the same for everyone. I’m feeling good, confident.

Kiradech fought hard and ended his day with a closing birdie from two feet after rifling a nine iron approach to within two feet of the pin.

Another shot behind were Matt Jones (66), Brian Gay (67) and Ollie Schniederjans (69). Jones was bogey-free in the third round, which to him was as impressive as any of his five birdies.