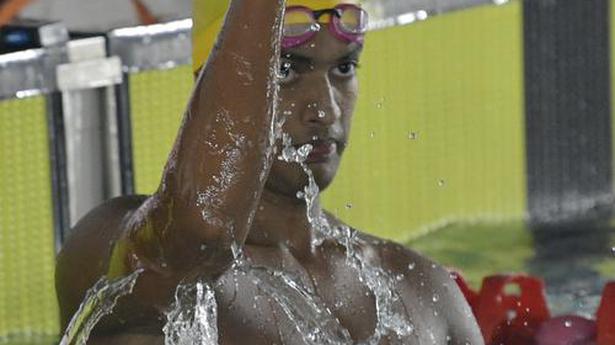 Kushagra Rawat and Srihari Nataraj opened their campaigns at the 74th senior National aquatic championships in style, rewriting the National records in 400m freestyle and 100m backstroke events respectively, at the Basavanagudi Aquatic Centre on Tuesday.

Delhi’s Kushagra beat his nearest rival, Aneesh Gowda of Karnataka, by nearly six seconds, touching the pad in 3:53.68, and in the process shaved 1.25 off Sajan Prakash’s previous record mark.

Olympian and Karnataka’s lead swimmer Srihari lowered his own previous best from the 2019 Nationals by just over half a second, coming home in 55.10.

In the day’s much-anticipated race, the women’s 100m backstroke, Karnataka’s Ridhima Veerendra Kumar, all of 14, beat Olympian Maana Patel by nearly one second, taking the gold in 1:04:40.

At the 2019 Nationals, Ridhima was handed the 100m backstroke gold after winner Maana was disqualified for a false start. But to take the gold after beating the current National record holder and a swimmer six years her senior, would feel special.

“I was not scared as such and took it as a challenge,” said Ridhima after the win. “I just swam my race and thought only of bettering my own time.

“I am a sprinter, so my first 50m is always faster. I have seen her (Maana) races and she is experienced and is a lot faster in the second 50m. So, I knew that I had to push myself more.”

Elsewhere, the seasoned Sajan Prakash, who is coming back from a shoulder injury, took the gold in men’s 50m butterfly with a timing of 24.90.