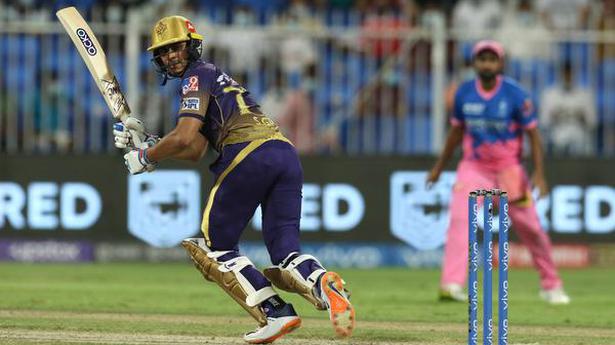 Shubman Gill overcame a slow start to make a measured half-century and guide Kolkata Knight Riders to 171 for four against Rajasthan Royals in Sharjah on Thursday.

RR, which chose to chase, bowled pace right through the PowerPlay and denied the KKR openers a flying start through tight and accurate bowling. On a slow surface, Sanju Samson used three quicks, who bowled 20 dots among them and conceded just three fours and a six in the first six overs. Shubman Gill’s classy straight six off Chetan Sakariya stood out. KKR’s score of 34 for no loss was the second-slowest PowerPlay score batting first in Sharjah this season.

The surface continued to prove difficult to score on freely. The RR pacers took pace off the ball; the occasional cutters gripped. There wasn’t a single over of spin in the first 10 overs. Venkatesh Iyer, known to play no-holds-barred cricket, found his timing in the 10th over when he hit Jaydev Unadkat for two sixes — over deep mid-wicket and over the bowler’s head.

KKR was 79 for no loss after 10.4 overs when, after having done all the hard work, Venkatesh was clean-bowled trying to play the reverse sweep against Rahul Tewatia’s leg-spin. He was replaced by Nitish Rana, who hit off-spinner Glenn Phillips for a four and a six before becoming his first IPL wicket. However, Phillips’ first over, which went for 17, was also the most expensive of the innings.

Rana might have lasted just five balls, but his knock looked to have given KKR’s innings a spurt. The in-form Rahul Tripathi walked in at No. 4 and began by flicking Phillips through midwicket for four. After being dropped by Samson on five, Tripathi collected back-to-back boundaries off Shivam Dube. At the other end, Gill brought up his second successive fifty of the UAE-leg with a boundary off a bottom edge. Chris Morris got Gill for 56, his first wicket in the second leg.

Tripathi and Dinesh Karthik’s lusty blows at the death meant KKR collected 102 off the last 10 overs and reached the highest score in Sharjah this season.