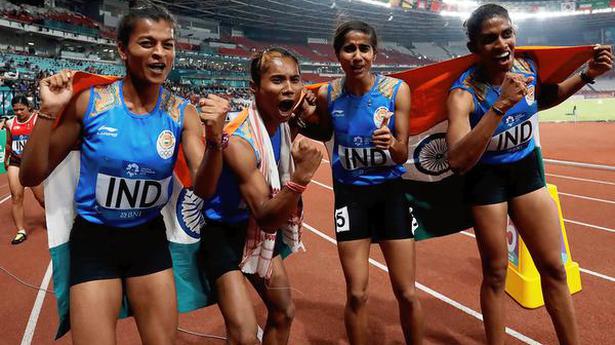 The Chinese virtually taking over this year’s Asian women’s quartermile rankings — they now occupy seven of the top 10 rungs, including the top four — should be a big worry for Indians.

Heading the chart is 29-year-old Huizhen Yang, 2015 Asian 400m champion, who clocked 51.63s for the National Games gold in Xi’an last month. Behind her are 19-year-old Guojuan Liu (51.94s) and Chunyu Wang (52s), who was also fifth in the 800m at the Tokyo Olympics, and Zenghuan Tong (52.17s). Never before has the Asian list looked so crowded with Chinese presence in the last 10 years.

India had five athletes in the Asian top 10 in 2019 (China had none then) and 2018 (China two) but has just two this year: the country’s fastest quartermiler this year Priya H. Mohan (52.77s) in fifth place and Dandi Jyothika (53.05) in ninth. 2020 has been pulled out from the comparative study as it was an inactive year.

The Chinese domination of the quartermile is an indication that India’s chances of extending its five-gold streak in the women’s 4x400m relay, which it had won at every Asian Games since 2002, could be in big trouble in the next year’s Asiad which China will host at Hangzhou in September.

“Since 2020 was a COVID year, our athletes did not have much time to train properly. Girls like Vismaya and others could not do well but they will come back. We need not get nervous, we still have time,” Tintu Luka, the star of the relay team that won gold at Incheon 2014 with the Asian Games record that the country still holds, told The Hindu on Wednesday. “But it won’t be easy, we will have to work harder this time.”

Two 18-year-olds, Priya and Summy (53.57), who helped India to the mixed relay bronze and women’s relay fourth place at the Nairobi under-20 Worlds in August, showed there are youngsters knocking at the relay team’s doors.

The recent National meets throwing up two more — AP’s Dandi Jyothika (53.05s, second fastest Indian this year) at under-23 Nationals and UP’s 16-year-old Rupal Chaudhary (53.73) in the 400m Nationals in Delhi on Tuesday — proved that there is abundant talent.

Incidentally, three of them were faster this year than the three who went to the Olympics with the mixed relay team. With the Indian women’s relay team failing to qualify for the Tokyo Olympics, it will be interesting to see what strategy the Athletics Federation of India adopts to bring the young talent into the national team for next year’s Asian Games, Commonwealth Games, under-20 Worlds and Worlds.