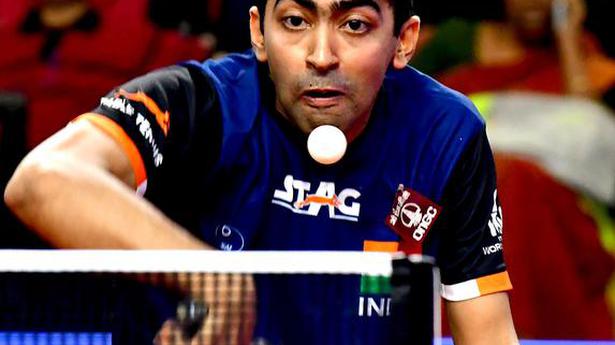 The Republic of Korea, the top seed, justified its top billing with a clinical 3-0 win over India in the men’s team semifinals of the 25th-ITTF ATTU table tennis championships here on Friday. India had to settle for the bronze, its best-ever performance in the continental event, which is being held under the aegis of Asian Table Tennis Union since 1972. The Indian women’s team finished fifth, defeating Thailand 3-1.

Sathiyan was confidence-personified when he took on Jang Woojin in the men’s first rubber. Ranked 12th in the world, Woojin has a stinging forehand and throughout the match, he didn’t lose control of his main weapon. Sathiyan, for his part, did well to attack Jong on his backhand, but the Korean was more than equal to the task in that aspect too.

If at all any player had the best opportunity to pull off a win it was Sharath. The top-ranked Indian was playing well against Lee Sangsu. His favourite forehand top-spins were working well, and add to that his serves and third ball attack were of top-quality, but he fluffed a few easy put-away shots in the decider that made the difference.

Leading 9-7 in the fifth and deciding game, Sharath allowed Lee to stage a comeback and in fact, he missed two easy forehand shots that were for the ‘killing’, and Lee won the next two points to win 11-9. In the third rubber, Harmeet Desai gave his all but went down to Cho Seungmin in thrilling five games.