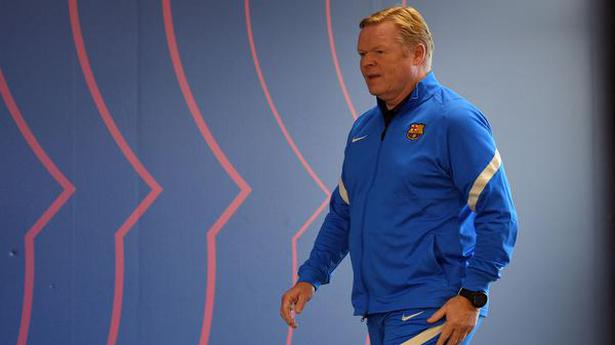 Ronald Koeman said on Saturday it was not possible for him to be under more pressure as Barcelona prepares to face Real Madrid in the first Clasico of the season.

Koeman appeared to be on the brink of losing his job earlier this month after Barca had won only once in six matches.

But the club’s president Joan Laporta moved to end the speculation by insisting Koeman “deserved the benefit of the doubt” and would stay on as coach.

“I don’t think it’s possible to be under more pressure,” said Koeman at the eve of match press conference.

“As Barcelona coach you have to take it, no problem. I know the importance of a Clasico.”

Asked if he still felt the backing of the club, Koeman said smiling: “I have to answer every game if that’s the case. I think I am the coach of Barcelona now, tomorrow let’s see. I feel supported by the club but I know everything depends on results.”

Barcelona sits seventh in La Liga after winning four of its opening eight games but it is only two points behind Real Madrid.

“It will just show what kind of moment the two teams are in.”

After beating Valencia in La Liga and Dynamo Kiev in the Champions League, a victory at Camp Nou on Sunday would round off an encouraging week for Koeman and his team.

Yet many believe Madrid is the favourite.

“We know exactly what we have, and what we have to do,” said Koeman. “I don’t have any fear.”

Jordi Alba trained on Saturday and is ready to play, despite suffering a minor ankle problem in midweek.

Ansu Fati is expected to start after beginning on the bench against Dynamo, with Koeman managing the 18-year-old’s minutes after he recently recovered from a serious knee injury.

“We have to keep calm so that he can fully recover,” said Koeman.

“Ansu cannot do it on his own, he is part of the team, but he is a player who can make a difference.”