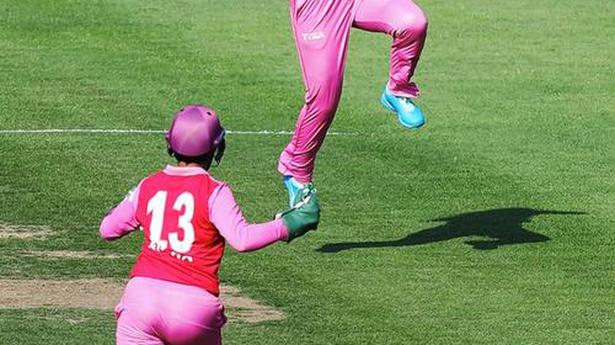 It didn’t take Velocity long to come crashing down to earth after Wednesday’s high. Not even a day in fact, as Mithali Raj’s women were bundled out for 47 on their way to a nine-wicket defeat at the hands of Trailblazers at the Sharjah Cricket Stadium on Thursday.

After their thrilling five-wicket win over defending champion Supernovas, another victory would have taken them to the final of the Women’s T20 Challenge. But now they have to await the result of Saturday’s game between Trailblazers and Supernovas to know their fate.

To be fair to Velocity, it may have been hard to play two games in as many days in the heat of Sharjah, but it was still a horror show by its batters. They gave away their wickets too easily, though Supernovas bowled superbly, especially Sophie Ecclestone.

The left-arm spinner from England took four for nine from 3.1 overs, showing why she is the ICC’s No. 1 bowler in women’s T20. She bowled an excellent length and varied her pace cleverly. There were two wickets each for seasoned seamer Jhulan Goswami and left-arm spinner Rajeshwari Gayakwad.

It was Jhulan who started it all, cleaning up Shafali Varma. The teenager was undone by her attempt to tap an in-coming ball through the third-man area. Shafali had put on 17 for the first wicket with Danielle Wyatt. That would remain the highest partnership of the innings, as Ecclestone got into the act soon.

She trapped Mithali lbw and castled Veda Krishnamurthy off successive balls. In her next over she bowled Sushma Verma, one of the stars on the previous night. Velocity was all out in 15.1 overs.

Though Supernovas lost the wicket of captain Smriti Mandhana early, her opening partner Deandra Dottin (29 not out, 28b, 3×4) took the team home with 12.1 overs to spare.

The finishing touch was provided by Richa Ghosh, who slog-swept Ekta Bisht splendidly for a six over deep mid-wicket.