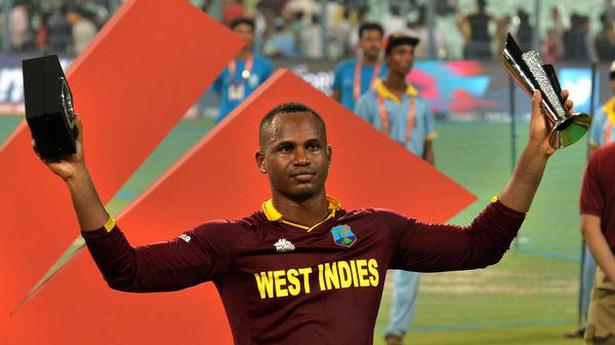 Samuels was known as the man for big occasions.

West Indian batsman Marlon Samuels, who top-scored in both of the team’s T20 World Cup final wins during a career that also had its share of controversies including a two-year ban for corruption, has retired from all forms of cricket.

‘ESPNcricinfo’ reported that Cricket West Indies chief executive Johnny Grave confirmed to it that Samuels had told CWI of his retirement in June, having last played in December 2018.

While his overall batting average is not overwhelming, Samuels was known as the man for big occasions, evidences of which were his exploits in the team’s T20 World Cup title triumphs in 2012 and 2016.

In 2012, he smashed 78 off 56 balls and lifted his team from 32 for two after 10 overs to victory in the title clash against hosts Sri Lanka in Colombo.

Four years later, Samuels became the only cricketer to be named player of the match in two ICC tournament finals, having struck 85 off 66 balls for a four-wicket victory over England in Kolkata.

Samuels, who began his international career way back in 2000, represented several T20 franchises around the world over two decades.

He had stints in Pune Warriors, Delhi Daredevils, Melbourne Renegades and Peshawar Zalmi.

He played 15 matches in the Indian Premier League (IPL), scoring 161 runs and picking up nine wickets.

Off the field, he made news for wrong reasons.

In 2008, Samuels was banned by the ICC after he was found guilty of “receiving money” and bringing the “game of cricket into disrepute”.

Six years before that, he was almost sent home for defying a team curfew in India.

He was also banned from bowling for a year after his action was found to be illegal in 2015.

In 2014, Samuels also objected to then skipper Dwayne Bravo’s decision to pull out in the middle of West Indies’ tour of India over pay disparity.

Recently, he was engaged in an online spat with Ben Stokes during which he made some unsavoury remarks against the England all-rounder.