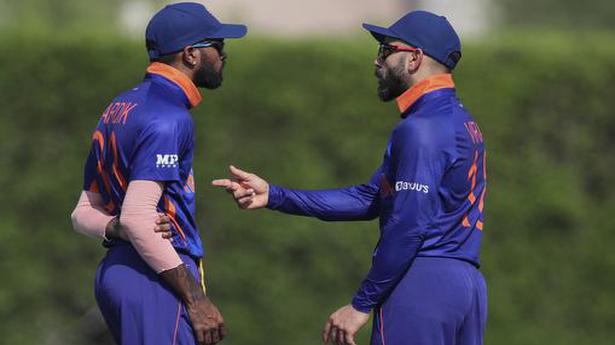 A day before India opens its T20 World Cup campaign against Pakistan, India captain Virat Kohli gave an insight into the squad’s mindset heading into the World Cup. Ahead of the match against arch-rivals Pakistan, Captain Kohli spoke on a range of topics, including Hardik Pandya’s selection and relinquishing T20 captaincy.

Also read: Pitches hold the key as the Super 12s gets underway on Saturday

Kohli does not reveal the playing XI

Yeah, we have spoken about our combinations, obviously. I’m not going to reveal them right now, but we have put in place a very balanced team, and something that we feel covers all bases properly. And we are pretty confident in terms of execution, as well, because the guys have been playing a lot of T20 cricket recently in the IPL and everyone is playing well, so that is a very positive thing for the team.

Now it’s purely down to execution out there in the middle, which everyone as I said is confident to do so and professional enough to understand their roles, and role clarity is something that we have addressed already. We feel very, very prepared.

I’ve already explained myself a lot. I don’t think I need to harp on that anymore.

Our focus is to play well in this World Cup and do what we need to do as a team. The rest, I mean, people are trying to dig something that doesn’t exist, and I’m not someone who’s ever going to give order to that. I explained myself very honestly and openly, and if people feel there’s more to it or there’s something that’s not been told, I feel pretty bad for them because that’s certainly not the case.

Is it difficult to switch off from IPL and get into the World Cup mode?

No, it does not. I mean, and it’s a very situational thing because we are in a situation where we are in charge over what we need to do on the team, and we understand for that to happen, we need to be in the most balanced place possible.

We feel pressure playing any kind of game, and it’s also a thing to understand that as professional cricketers, you eventually start thinking about the situation that you’re going to be in as batsmen and bowlers, or batters and bowlers, I should say, and it’s very important for us to keep focused on that because a game like this, there’s such unnecessary stuff from a professional point of view happening on the outside there. It’s fine. It’s fine, as long as that stays outside our controlled environment and we just focus on what we need to do as cricketers.

Well, honestly I feel that Hardik presently with his physical condition is getting better in terms of being prepared to bowl at least two overs for us at a certain stage in this tournament, and we believe, we strongly think that we can make the most of the opportunity that we have at hand until the time he starts bowling. We have considered a couple other options to chip in for an over or two. So we are not bothered about that at all.

What he brings at that No. 6 spot is something that you just can’t create overnight, and hence I was always in favour of backing him in Australia as a batter purely, and we saw what he did in the T20 series and how he can take the game away from the opposition when he’s in full flow.

These things from a discussion point of view seem very interesting that if he doesn’t bowl will he be left out, but we understand the value he brings to the team as the No. 6 batter, and in world cricket if you look around, there are specialists who do that job, and it’s very important to have that guy, especially in T20 cricket, who can play and impact innings of that stage. Even when the chips are down, he’s someone who can play a long innings playing in that way.

For us that is way more valuable than forcing him to do something that he’s not ready for at the moment, but he’s motivated and he’s very keen to start giving us a couple of overs, and when that happens, obviously the balance becomes even better, but we are pretty confident how we are heading into the start of this tournament.

We try and go into any game with absolute preparation, understanding of our plans, what we need to do against the opposition, and as long as we do that, we go in confident against any team in the world anywhere.

So I don’t think on those lines. For me what matters is how the individuals are playing at that particular time, and what I can say is that all the people in the team are playing their roles to perfection, are executing their plans really, really well, and that gives us a lot of confidence heading into this tournament.

On the quality of the pitches and the dew factor

Looking at the IPL finals, I believe that the quality of pitches definitely is going to be far better in this T20 World Cup. Also it being an ICC tournament, we know that the standard of pitches has to be maintained to a certain degree which is consistent across all venues, and I understand that to protect the pitches for a tournament like the World Cup, there had to be some kind of compromising done with the playing conditions when we played the IPL. We all understood that, and the wicket in the IPL finals was very, very good.

I think someone asked me about the dew factor as well, and whether the toss was going to be important. I think the dew factor is becoming prominent as we head into this time of the year in Dubai, and that is also going to help the pitches play much better. I presume Abu Dhabi and Dubai are probably going to be the best pitches out of all the venues, and Sharjah more or less will stay true to its true nature, which is slow and low. I don’t see many high scoring unless dew becomes such a massive factor there, as well, but yeah, wickets will be much better in this tournament.