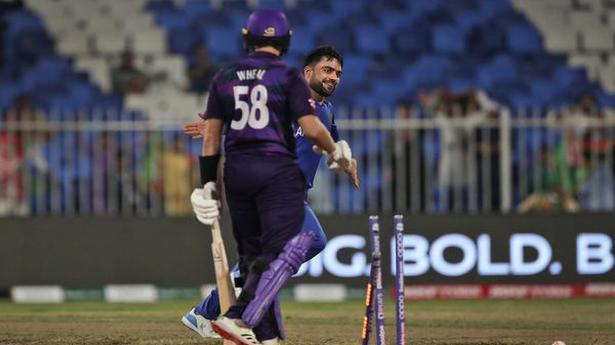 Afghanistan produced a dominating display of power-hitting before Mujeeb Ur Rahman and Rashid Khan spun out the Scotland line-up with five- and four-wicket hauls as the team routed Scotland by 130 runs in a Super 12 match of the T20 World Cup here on Monday.

Afghanistan posted a challenging 190 for four after opting to bat and bundled out Scotland for 60 in just 10.2 overs to register a mammoth win in Group 2.

Mujeeb couldn’t get a hat-trick but two balls later, he trapped Richie Berrington to reduce Scotland to 28 for three in four overs. Wickets continued to tumble as Matthew Cross and George Munsey (25) departed in the next two overs.

The trend continued as Michael Leask, Chris Greaves and Mark Watt fell to guile of Mujeeb (five for 20) and Rashid (four for nine). After Mujeeb’s heroics, Rashid polished off the Scotland tail.

Scotland’s struggle against spin was reflected in the fact that five of its batters failed to open their accounts.

Earlier, Nazibullah Zadran struck a blistering half-century in a dominating batting display of power-hitting as Afghanistan posted a commanding 190 for four.

Opting to bat, Zazai and Mohammad Shahzad (22) got Afghanistan off to a flier, making 54 off just 35 balls, before the latter holed out to deep midwicket. Zazai played aggressively right from the start, punishing the loose deliveries for fours and sixes.