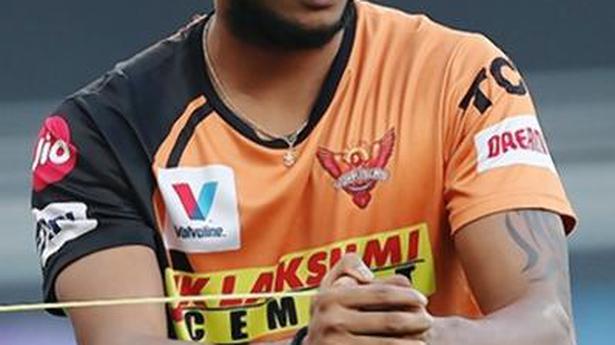 Sunrisers Hyderabad’s Sandeep Sharma says left-arm pacer T. Natarajan is a totally different bowler now, after the two of them played crucial roles in the emphatic win over Royal Challengers Bangalore on Saturday.

“When I started bowling, it was a bit sticky. It’s coming nicely, it’s got cooler here, so it’s helping.

“I have been bowling the knuckle ball, Jonny (Bairstow) has been helping me. It took around three or four months to get it right,” Sandeep said at the post-match media conference.

Sandeep said he has known Natarajan from the days they played together for Kings XI Punjab.

“He is a totally different bowler now.

“He has worked hard on his variations, especially yorkers,” he said.

“His execution is a treat to watch. It is very important for us to have someone like him. He is an integral part of SRH’s bowling attack,” Sandeep said.

“We have to go and just express ourselves. We have nothing to lose and with the same attitude, we are going to go into the next game against Mumbai Indians on Tuesday,” said Sandeep, who dismissed Devdutt Paddikal and Virat Kohli.