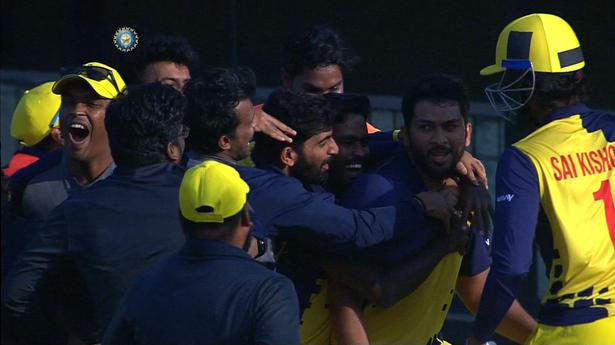 Towards the end, even as Tamil Nadu was fast losing the plot, Shahrukh Khan stood between Karnataka and the glittering Syed Mushtaq Ali Trophy.

Indeed, Shahrukh rose to the occasion.

Prateek erred in line and Shahrukh cleared his left foot and sent the final ball soaring into the stands behind square-leg.

Even as the ball began its flight, Shahrukh made a triumphant sprint towards the dugout and met his charging teammates inside the ropes.

Another glorious chapter added to the legacy of Tamil Nadu and Karnataka’s on-field rivalry.

The sight of a joyous Shahrukh was in sharp contrast to Prateek. The medium pacer, who bowled two crucial wides in the last over, had followed the flight of the title-deciding stroke before burying his head in both hands in despair.

To Karnataka’s credit, it fought valiantly to reach 152.

Top-order batters Rohan Kadam, Manish Pandey and Karun Nair lost their off-stumps to the left-arm spin of Sai Kishore (3/12) and Sanjay Yadav in the PowerPlay.

Surprisingly, Tamil Nadu’s Saravana Kumar, who took five wickets in the semifinals, was kept out of the final.

If TN fell back in its chase, the reason was the lack of urgency from the third-wicket pair of N. Jagadeesan and skipper Vijay Shankar against spinners Suchith, K.C. Cariappa and Dubey. For 49 deliveries, between the fifth and the 13th overs, the boundaries dried up.

Amid rising desperation, Vijay Shankar and Jagadeesan fell to Cariappa in succession after failing to clear long off. This brought in Shahrukh and soon, TN needed 55 off 24 balls.

Undeterred, Shahrukh smashed a straight six to leave 16 off the last over. A first-ball boundary from Sai Kishore, two wides and a tight second run later, came Shahrukh’s masterstroke.