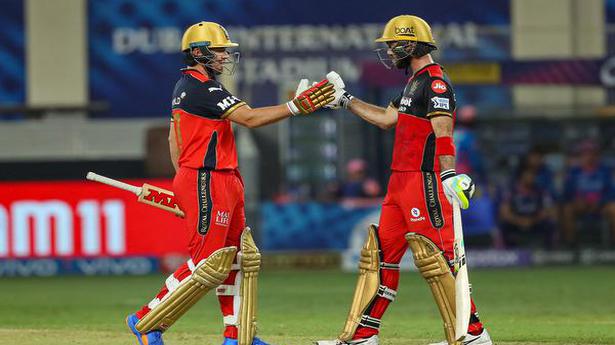 RCB are currently placed third in the pecking order with seven wins and four defeats for a total of 14 points.

Royal Challengers Bangalore will look to inch closer to securing a playoff berth when they clash with Punjab Kings in their Indian Premier League match here on Sunday.

Eyeing their first IPL title triumph, RCB are currently placed third in the pecking order with seven wins and four defeats for a total of 14 points.

Another two points from a win will almost assure them of a place in the place-offs but for that, RCB will need to put it across Punjab Kings who are coming off a morale-boosting win against Kolkata Knight Riders.

Also read: Chance for Delhi to bounce back against struggling Mumbai

With their five-wicket victory over KKR, Punjab Kings too kept alive their prospects of making the playoffs, even though they are down at fifth position with 12 points after five wins and seven reverses.

Up against an ambitious RCB outfit, Punjab Kings will have their task cut out at the Sharjah Cricket Stadium.

Even though he didn’t go on to make a big score, Virat Kohli looked good during his stay in the middle in his team’s victory over Rajasthan Royals, as did the skipper’s young opening partner Devdutt Padikkal.

Both of them played some cracking shots before the in-form star all-rounder Glenn Maxwell completed the job with his second straight half-century.

If the situation demands, like in their last outing, Maxwell can again afford to look at Srikar Bharat to build a solid partnership in the middle overs.

Batting down the order this season, AB de Villiers provides RCB the kind of cushion the other teams lack, and Punjab Kings are well aware of this fact.

The bowling will be manned by the likes of Mohammed Siraj, Harshal Patel, Shahbaz Ahmed and Yuzvendra Chahal, who has overcome his past struggles with some very impressive spells this season, adding to RCB’s strengths.

Punjab Kings, on the other hand, will again rely on their trusted opening duo of skipper KL Rahul and Mayank Agarwal to provide them a flying start.

They were among the runs against KKR, and will look to do an encore against RCB.

The biggest plus for Punjab Kings heading into the RCB game is their death bowling that paved the way for their win in the last match.

Mohammed Shami and Arshdeep Singh’s two incisive overs at the death went a long way in setting up Punjab’s victory against KKR, and the team would hope for a similar outing from the two against RCB.