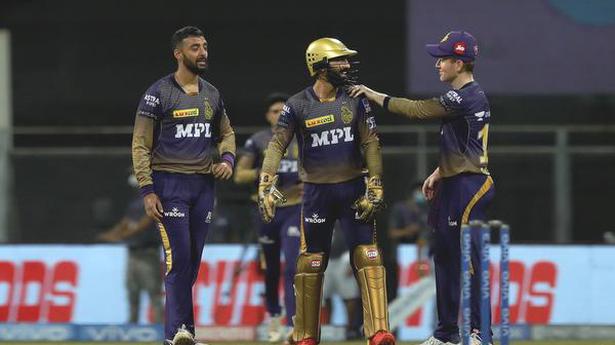 Rishabh Pant is an unpredictable captain. He shuffles his bowlers on instinct and that will hold the key when Delhi Capitals meets Kolkata Knight Riders at the Narendra Modi Stadium in Ahmedabad on Thursday.

KKR looked a different outfit when it restricted a star-studded Punjab Kings to 123 for nine, but its batting department remains wobbly. Chasing a modest target, Eoin Morgan’s side was three down for 17 before the skipper upped the ante.

Against DC, which is blessed with a variety of spin and pace options, KKR’s batsmen will continue to be tested. Uncapped pacer Avesh Khan has been DC’s best bowler, with 12 wickets in six outings. The addition of Ishant Sharma after R. Ashwin’s departure has augured well for the side.

As for DC’s batting, Shimron Hetmyer is finally blooming in the IPL. The unbeaten 53 off 25 balls against Royal Challengers Bangalore will give him a lot of confidence before he faces the likes of Pat Cummins and Sunil Narine.

Morgan’s decision to persist with Narine has reaped benefits for KKR. The experienced spin bowler has been among the wickets and remains a strong source of support for Varun Chakravarthy.

Fast-bowlers Shivam Mavi and Prasidh Krishna have got their lengths and pace variations right, which has kept New Zealand quick Lockie Ferguson out of the mix.

Rahul Tripathi has been the most consistent KKR batsman. Shubman Gill’s form is a cause for concern and the opener will be keen on a big score to silence the critics.