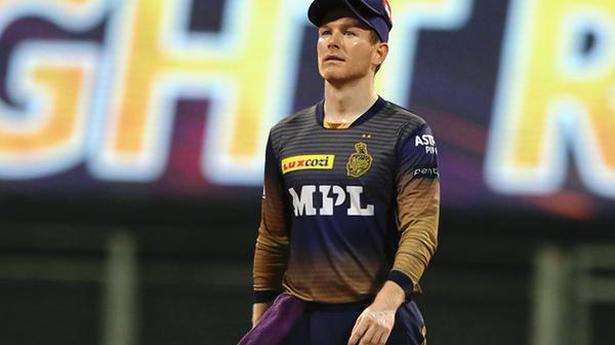 Kolkata Knight Riders (KKR) will look to take a step closer to a playoff berth when it faces Rajasthan Royals (RR) in Sharjah on Thursday. RR’s loss against Mumbai Indians on Tuesday means it is pretty much out of the race.

The win against Sunrisers Hyderabad (SRH) took KKR to 12 points and its net run rate to +0.294, the best among the teams eyeing the final playoff berth. A win against RR will likely to ensure it finishes fourth.

However, if it loses, it will have to rely on SRH to beat Mumbai, in which case KKR should go through on NRR.

KKR has banked on all-round team effort. Against SRH, playing his first game of the second leg, Shakib Al Hasan made a mark, first by getting out Kane Williamson with a direct hit and then with figures of 1 for 20. Sunil Narine and Varun Chakravarthy continue to maintain a stranglehold through the middle overs.

In UAE, KKR batters have hammered bowling attacks upfront. However, against SRH, Venkatesh Iyer and Rahul Tripathi were out early. KKR would hope that’s an aberration.

On Wednesday, a social media post shared by KKR showed the injured duo of Andre Russell and Lockie Ferguson sweating it out in the nets. Should they return against the Royals, it will be a boost.

Meanwhile, Rajasthan’s meek surrender against Mumbai was the exact opposite of its flashy win against Chennai. On a Sharjah wicket that played low and slow, some RR batters were guilty of playing across the line against length balls as it limped to 90 for nine, its third-lowest total in the IPL. Royals could consider playing an experienced Jaydev Unadkat in place of Kuldip Yadav.