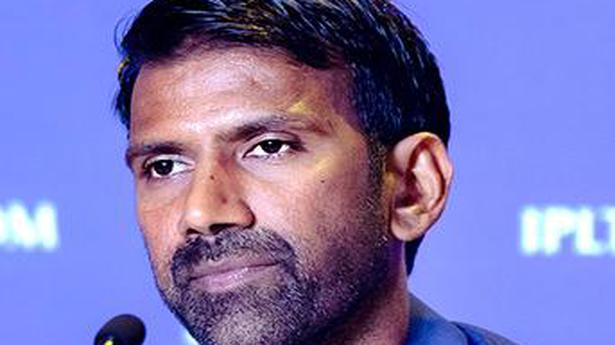 At least two members of the Chennai Super Kings contingent, including bowling coach L. Balaji, have been diagnosed with COVID-19.

It means that CSK’s next match, against Rajasthan Royals on Wednesday, will in all likelihood be deferred since Balaji and his “close contacts” will have to be isolated for six days.

It was revealed on Monday that the reports of Balaji and a member of the logistics team (bus driver) for the tests conducted on Sunday were positive.

Since Balaji was involved in CSK’s last-ball loss to Mumbai Indians on Saturday night, Monday’s practice session was called off and all members of the contingent were confined to their rooms.

“One’s health is most important,” a CSK source told The Hindu. “The rapid antigen showed negative results but the RT-PCR tests came positive. But the symptoms are mild.”

While K.S. Viswanathan, the chief executive officer, was also diagnosed with the infection, a rapid antigen test on Monday was found to be negative.

Results of another RT-PCR test conducted on Monday are awaited.

Neither CSK nor RR has been officially notified about a change in plan for Wednesday’s match but according to a BCCI official, CSK “cannot be allowed to play” as per the health and safety protocols for the tournament.

Meanwhile, R. Ashwin is set to join Delhi Capitals for the league stage’s last leg in Kolkata, starting on May 9.

According to a DC insider, Ashwin will serve the mandatory week-long isolation before re-entering the bubble next week.

Ashwin had left the squad due to COVID-19 concerns in his family at the end of the Chennai leg last week.

Meanwhile, the Capitals team has been put in isolation in Ahmedabad since Monday afternoon as a ‘precautionary measure’.