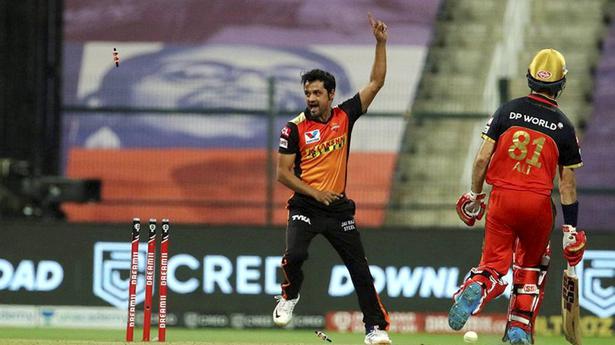 Jason Holder led SRH’s bowling attack with impressive figures of three for 25 and was ably supported by T Natarajan (2/33) as RCB found the going difficult from the beginning.

Sunrisers Hyderabad produced a brilliant bowling effort to restrict a batting-heavy Royal Challengers Bangalore to a modest 131 for seven in the IPL Eliminator here on Friday.

Jason Holder led SRH’s bowling attack with impressive figures of three for 25 and was ably supported by T Natarajan (2/33) as RCB found the going difficult from the beginning.

AB de Villiers (56 off 43) scored a timely half-century to somewhat rescue RCB from a horrible start and take the team past the 120-run mark.

RCB witnessed a horrendous start to their innings as they lost two wickets for 15 runs inside four overs after being sent into bat.

Skipper Virat Kohli (6) , who opened the innings along side Devdutt Padikkal (1), was the first to depart, nicking one on the leg side to injured Wriddhiman Saha’s replacement Sreevats Goswami off Holder.

An over later, Holder picked up his second victim when Padikkal pulled one to Priyam Garg inside the circle as RCB slumped to 15 for two.

Aaron Finch (32 off 30), who replaced Josh Philippe, and de Villiers then tried to stabilise the innings with a 41-run third wicket stand.

But twin blows in the 11th over put paid to RCB’s effort.

First, Finch departed, caught by Abdul Samad off Shahbaz Nadeem (1/30) and then a ball later, Moeen Ali was caught short off the crease by a direct hit from Rashid Khan.

Shivam Dube (8) didn’t help his side’s cause, so was Washington Sundar (5).

In between, De Villiers brought up his 50 off 39 balls with a boundary off Holder, but he was soon sent packing by a gem of an yorker from Natarajan as RCB lost their last hope.

India-Australia Test series to begin at Nagpur from Feb 9