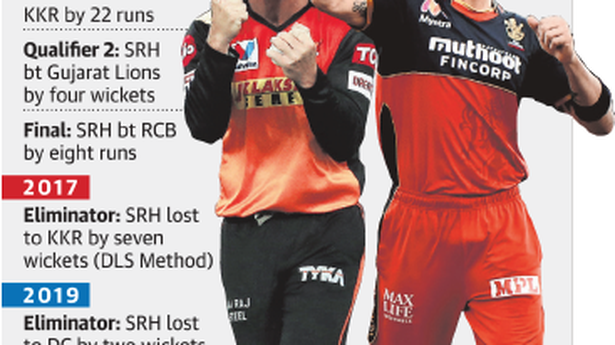 Warner’s men have won last three games; Kohli’s side will need its game-changers to step up

After being down and nearly out, with just four wins in 11 matches, Sunrisers Hyderabad has scripted an impressive turnaround to reach the playoffs and will start as the favourite against Royal Challengers Bangalore at the Sheikh Zayed Stadium in Abu Dhabi on Friday.

The 2016 IPL champion had to win its final three games, which it did comprehensively to pip RCB and finish third, thanks to a better net run rate.

SRH struggled in the first half of the tournament to find the right combination. Since then, a few changes to the line-up have helped with the revival.

Jason Holder, who joined the squad after the injury to Mitchell Marsh, has been a revelation with the ball, picking up ten wickets in five matches. Along with T. Natarajan, he has been effective in the death overs. He also played a cameo with the bat against RCB when the team was in trouble.

Another change that has worked for SRH is the introduction of Wriddhiman Saha at the top of the order. The Indian wicketkeeper, who replaced Jonny Bairstow to accommodate Kane Williamson and balance the side, has slammed 184 runs (87, 39 and 58 n.o.) in the last three games, opening with David Warner.

In contrast, RCB comes into the contest on the back of four defeats, losing its early momentum.

The team’s batting unit has struggled in the last four matches. Skipper Virat Kohli himself hasn’t scored as many runs as he is accustomed to, with just three half-centuries so far, and is due for a big knock.

Another area of concern is the fitness of Chris Morris, who had to leave the field with a hamstring niggle after bowling just two overs in the last league game against Delhi Capitals.

RCB has reached the playoffs for the first time since 2016, when it finished runner-up to SRH. But it will need to find the form it showed in the first half of the tournament to extend its stay in the business end.