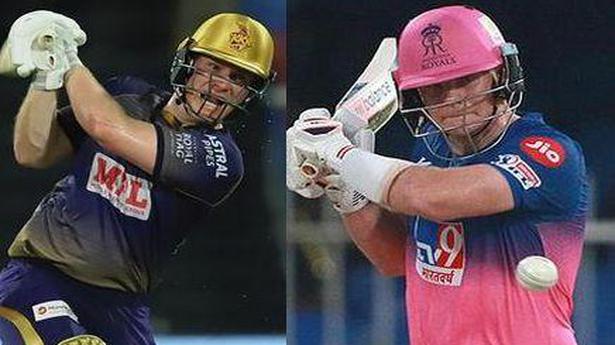 The best-case scenario for RR would be KXIP losing their last match and SRH winning no more than one in their last two outings.

They have just given their playoffs qualification hopes a lift and Rajasthan Royals will look to sustain the momentum against Kolkata Knight Riders in another must-win IPL game in Dubai on Sunday.

Besides a victory in their last league game, the inaugural edition winners will also need other results to go their way if they are to make the playoffs of the lucrative event, in its 13th edition now.

The best-case scenario for RR would be Kings XI Punjab losing their last match and Sunrisers Hyderabad winning no more than one in their last two outings.

In that case, RR will go through with 14 points, without net run rate coming into play.

However, RR’s first task is to do what is within its control — win the match against the Knight Riders and then hope for the best. Given the tight situation, the bigger the margin of win, the better it will be for the Steve Smith-led side.

The Royals can certainly look forward to their batting at the Dubai International Stadium. Their talismanic England all-rounder Ben Stokes has just won a Man-of-the-Match award, having made a breezy half century after picking up two wickets, in the team’s win over Kings XI Punjab on Friday.

The 2019 World Cup final hero getting his mojo back, at such a crucial juncture of the tournament, is great news for the Royals. And, needless to say, a bad one for KKR as the leading all-rounder can singlehandedly influence the outcome of a game.

Sanju Samson rediscovering his touch must have also gladdened the hearts of the RR team management. The wicketkeeper-batsman had started the tournament on an explosive note before going off the rails midway, only to come back all guns blazing against KXIP.

Skipper Smith can play according to the situation and opener Robin Uthappa can put any attack to the sword on his day.

No opposition takes Jos Buttler lightly and then there is Rahul Tewatia and young Riyan Parag down the order, beefing up RR’s batting.

Jofra Archer has been the standout performer with the ball and he will again shoulder RR’s responsibility in bowling.

While they have as many points as RR and KXIP, KKR’s road to the playoffs looks the toughest, thanks to their abysmal net run rate. Their only chance of qualification is if they beat Royals and finish on 14 points, with none of the other contenders reaching that tally. That seems improbable, the last two successive losses badly hurting their prospects.

Nevertheless, the likes of Shubman Gill, Nitish Rana, captain Eoin Morgan in batting and Varun Chakravarthy, Pat Cummins and Kamlesh Nagarkoti with ball would like to give it their all.