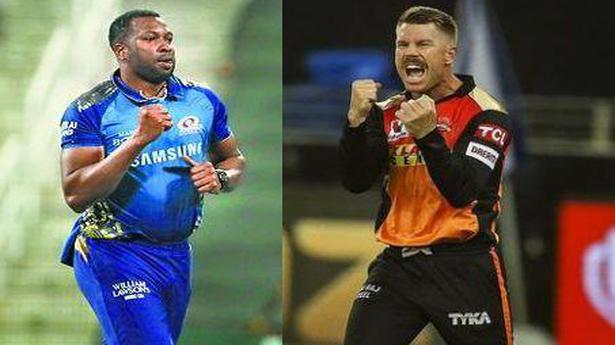 Thanks to their healthy run-rate, a win against Mumbai Indians should be enough to send Sunrisers into the final-four.

Riding high on momentum, resurgent Sunrisers Hyderabad will back themselves to topple the mighty Mumbai Indians and qualify for the IPL play-offs here on Tuesday.

Thanks to their healthy run-rate, a win against Mumbai Indians should be enough to send Sunrisers into the final-four.

After taking a tough call to leave out the dangerous Jonny Bairstow from the playing eleven, Sunrisers have managed to find out the “right” balance. Wriddhiman Saha has made an instant impact as David Warner’s opening partner and the inclusion of Jason Holder has given them an all-round option.

Pacers Holder and Sandeep Sharma were extremely impressive, both upfront and at the death, in the last game Royal Challengers Bangalore.

Add left-arm pacer T Natarajan and trump card Rashid Khan to their bowling attack, it makes up for a well rounded attack.

Sunrisers are not just riding high on momentum, they are also a team, full of confidence, having outplayed Delhi Capitals and RCB in their previous two outings.

“In 2016 we had to win three games and we did that,” said skipper Warner after the RCB game, referring to their title-winning campaign four seasons ago.

Sunrisers also know there is little scope for error against formidable outfit like Mumbai Indians, who seem to be on course for an unprecedented fifth IPL title.

In the absence of injured skipper Rohit Sharma, Mumbai Indians steamrolled RCB and Delhi Capitals in their previous encounters, becoming the first team to qualify for the play-offs.

Trent Boult and Jasprit Bumrah have looked menacing with the swinging new ball and ever so frugal with the old.

Kieron Pollard has been impressive with his captaincy in Rohit’s absence. With Indian team not picking Rohit for the Australia tour, there is no official update on his recovery from a hamstring injury he suffered two weeks ago.

“Rohit is getting better and hopefully he’ll be back soon,” Pollard had said after the match against DC without elaborating on Rohit’s fitness status.

Already assured of the top spot in the points table, Mumbai Indians will be expected to put up another ruthless show against Sunrisers.

The nature of surface in Sharjah has changed drastically with low-scores replacing 200-plus totals, which was the norm at the start of the tournament.

In Saturday’s game, RCB could only manage 120 against Sunrisers who chased down the paltry target in 14.1 overs.

CSK were limited to 114 for nine by Mumbai Indians on October 23. Again, the chasing team got the job done rather comfortably.