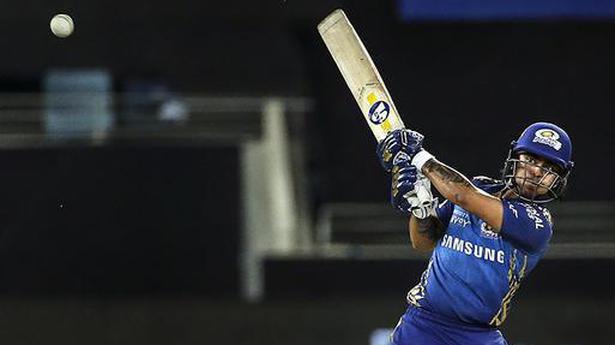 De Kock, Suryakumar, Ishan and Hardik power side to 200 before Boult and Bumrah settle the contest; Shreyas’ men will need to regroup quickly before Qualifier 2

A terrific end-overs heist from Ishan Kishan (55 n.o., 30b, 4×4, 3×6) and Hardik Pandya (37 n.o., 14b, 5×6), followed by a Trent Boult-Jasprit Bumrah bowling masterclass, put Mumbai Indians in the IPL final with a resounding 57-run win over Delhi Capitals at the Dubai International Stadium.

Boult and Bumrah then left DC reeling at 0 for 3 after just 1.2 overs. Prithvi Shaw was caught behind and Ajinkya Rahane out leg-before to Boult (2-1-9-2) before Bumrah bowled Shikhar Dhawan with an inch-perfect yorker. When Bumrah had Shreyas Iyer caught at cover with the score at 20, the contest was all but over.

Marcus Stoinis resisted with a half-century (65, 46b, 6×4, 3×6), but a double-wicket maiden from Bumrah (4-1-14-4) in the 16th over ensured the Australian’s knock was merely academic. DC has one more opportunity to make the final, but it will need to summon all its powers of recovery following a loss of this magnitude.

After DC chose to bowl, de Kock provided MI with a blistering start, creaming three boundaries in the first over from Daniel Sams.

R. Ashwin struck off his third ball, trapping Rohit leg-before, but de Kock chugged along merrily, driving the offie through cover, pulling Kagiso Rabada behind square and then hoisting Axar Patel over long-on.

Suryakumar hit Ashwin for a straight six and a punched four to round out the PowerPlay at 63 for one, but the latter broke through again, forcing de Kock to miscue a loft to long-off in the eighth over.

Suryakumar brought up his fourth half-century with a superb cross-batted whip off Anrich Nortje, but the South African soon had him caught at fine-leg off a bouncer. When Pollard fell to a carrom ball from Ashwin, MI had slumped from 78 for one to 101 for four.

But 32 runs across the 15th and 16th overs brought MI back to life, with Ishan racing to 33 off 21, from 11 off 14 at one stage. The humongous six off Rabada over deep square-leg was his stand-out shot.

Stoinis conceded just five runs in the 17th over and removed Krunal Pandya. But Hardik smoked Rabada over long-on and deep mid-wicket before sending Nortje soaring over long-on and long-off. Ishan’s acrobatic maximum over deep extra-cover brought up his fourth fifty and MI’s 200. Boult and Bumrah delivered the knock-out punch not long after.