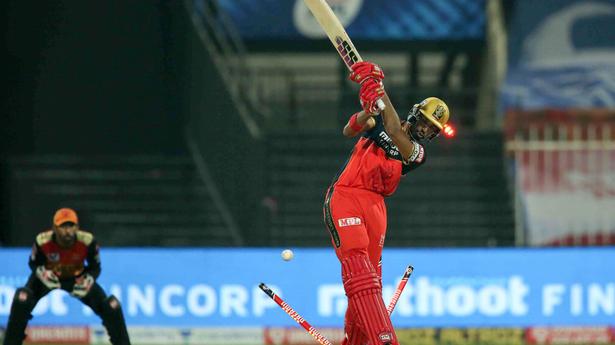 After bowlers restrict Royal Challengers to 120 for seven, batsmen chase target down with 5.5 overs to spare; despite the loss, Kohli’s side remains second

Sunrisers Hyderabad took control of its IPL destiny, beating Royal Challengers Bangalore by five wickets at the Sharjah Cricket Stadium on Saturday. The win places the side fourth (12 points), but with a more-than-healthy net run rate of +0.555, all it needs is a victory over Mumbai Indians on the final day to make the playoffs.

RCB, too, has its fate in its hands, despite squandering three opportunities to record the solitary win it needs. Monday’s game against Delhi Capitals will likely be a shoot-out.

The wily leggie then had Saha stumped, before Isuru Udana got Kane Williamson to turn a routine run chase into a tense one.

But the burly Jason Holder came up with an unbeaten 10-ball 26 that contained three maximums, all on the leg-side and all off the back-foot. Nineteen runs came off one Navdeep Saini over, releasing all pressure.

Chahal, who had bowled a dream first spell (3-0-13-2), was held back by Virat Kohli, and it was all over one ball into his reintroduction in the 15th over.

Earlier, after being put in, the RCB batsmen, Kohli and A.B. de Villiers included, looked staid and unadventurous — albeit on a sticky wicket — and allowed SRH to bowl a whopping 50 dot balls.

Sandeep Sharma’s splendid first spell (3-0-13-2) pegged RCB back as it scored just 30 runs in the PowerPlay. He rearranged Devdutt Padikkal’s stumps and snapped up Kohli on the drive. It was the seventh time Sandeep had dismissed Kohli in the IPL.

Josh Philippe (32, 31b, 4×4) improvised, with flat-batted strokes and sweeps. But the young Aussie and de Villiers were dismissed in a span of five deliveries, to leave RCB reeling at 76 for four.

From there, RCB added just 44 more, with the 27 it scored in the last five overs the lowest by a team batting first this IPL.