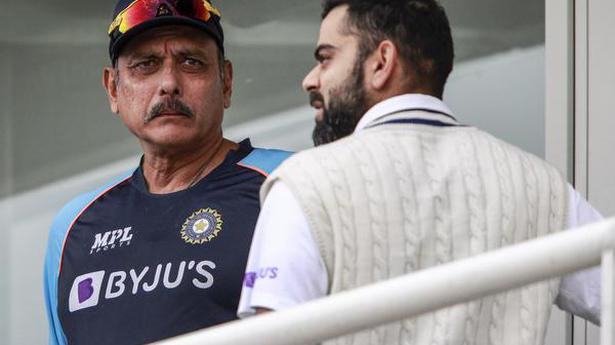 M.S. Dhoni returning to India’s dressing room — debuting in a non-playing member capacity — for the T20 World Cup must have put a wide smile on head coach Ravi Shastri’s face. After all, for much of the seven-year duration — divided in two stints and with different designations — Shastri has preferred to remain in the shadow of someone, be it Dhoni or Virat Kohli.

As Shastri is set to sign off his glorious career at the helm of Team India — often marred by the exaggerated memes on social media about his off-the-field image — the gritty allrounder would be as eager as anyone else in the Indian contingent for the team to make a strong comeback after the loss to Pakistan.

After all, despite achieving stupendous success with the team, especially the Test team consistently starting to win overseas, an ICC Trophy has been missing from Shastri and Kohli’s much-acclaimed combo.

Starting with the 2015 World Cup, when Shastri was the Team Director, he has been a part of India’s coaching staff at every ICC tournament, except the 2017 Champions Trophy.

However, in none of his four previous attempts the team has not crossed the final hurdle. Despite leading the inaugural ICC Test Championship league table, India stumbled against New Zealand in the final earlier this year.

And in the three limited overs’ tournaments where he has been the guiding force, India has failed to cross the semifinal hurdle.

India opted to skip training yet again on Thursday. With less than 72 hours remaining for the must-win clash against New Zealand on Sunday, Shastri, the great motivator, would be focussed on ensuring a relatively young bunch (in terms of international experience) does not think too far ahead.

Despite his image on social media, the cricketers who have been under Shastri’s wings admit that he has been as good as anyone else when it comes to helping them with 3Ts — technique, tactics and temperament.

Shastri, over the couple of years, has tried his best to downplay the silverware of an ICC trophy while speaking about the achievements of his group. But knowing the fierce personality that Shastri is, he would keen to sing the last hurrah with India becoming the T20 World Cup champion. After all, Champion of Champions has been a tag associated with Shastri the cricketer for almost four decades now.

While underlining the evolution of India’s men in the last five years, even captain Kohli admitted that winning the World Cup is the ultimate goal for him and Shastri.

“Winning an ICC tournament will definitely be a wonderful moment for all of us, for him as coach, for me as captain.

“It’ll be an amazing achievement and something that we are obviously motivated for and we’ll give everything we have,” Kohli had said last week.

India’s men will be desperate to give their beloved coach a fitting farewell.