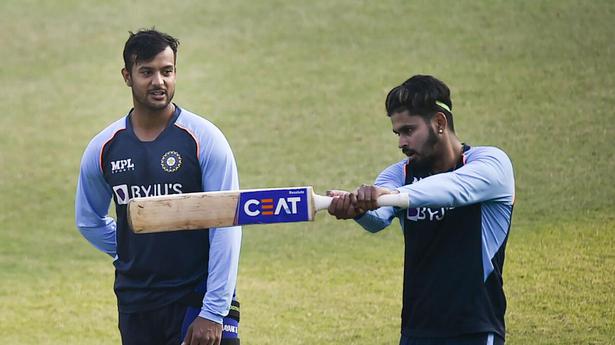 Leading the squad, without some of the regulars, Ajinkya Rahane is
quietly confident of the ammunition needed to take out New Zealand.

With a new coach, a stand-in captain and another home series
waiting to be won, a depleted India still looks ready to whip out a
familiar result.

Moreover, given the conditions at the Green Park Stadium here and
spin-resources in the squad, coach Rahul Dravid will not be required
to bring in much of his cricketing acumen to stump the opposition on
his “Test debut”.

Leading the squad, without some of the regulars, Ajinkya Rahane is
quietly confident of the ammunition needed to take out New Zealand,
the reigning World Test champions.

Although not a rank turner, the pitch here appears dry and good enough
for the spin trio of R. Ashwin, Ravindra Jadeja and Axar Patel to get
into the act early. In short, the longevity of this Test depends
entirely on how New Zealand bats.

Last time a Test was played here, involving these teams in 2016,
Ashwin took 10 wickets and Man-of-the-Match Jadeja six, to go with his
unbeaten 50. The match did go into the fifth day with India winning by
197 runs.

For the first Test to be competitive, skipper Kane Williamson and Ross
Taylor will have to show the way to play spin. The duo, after playing
an important part in the World Test Championship final at Lord’s, will
be keen to repeat the dose to the Indian spinners, despite the
occasion and the conditions being vastly different here.

A similar sentiment runs in the Indian dressing room, too. Having
blanked New Zealand in the three-match T20 series after losing the key
World T20 league tie match to the Kiwis, the host is raring to inflict
a 2-0 whitewash in Tests to avenge the loss suffered in the WTC final.

Looking to do one better than last time in the on-going WTC, India has
no reason to provide batting-friendly pitches in the series.
Similarly, New Zealand is not known to alter its home advantages in
any format.

After all, India and New Zealand thrive in home conditions. In the
past 10 seasons, if one considers only the decisive Tests played in
these countries, New Zealand won 43 out of 48 and India, 47 from 51.
Now expect India to improve that number.

Given that spinners will call the shots here, it remains to be seen
which two new-ball bowlers among Ishant Sharma, Siraj Mohammad, Umesh
Yadav and Prasidh Krishna will be considered.

New Zealand not only faces concerns regarding playing quality spinners
on these pitches but also, how its slower bowlers bowl to the Indian
batsmen.