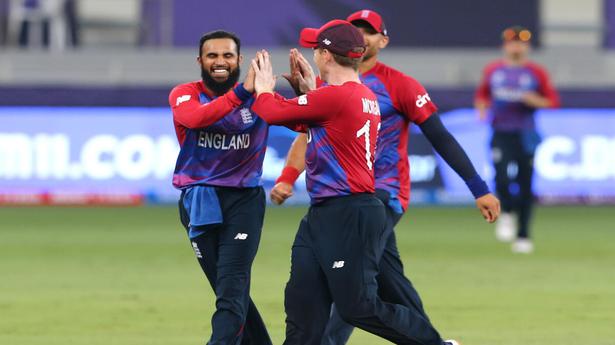 As the first ball of the Super 12 match between England and West Indies at the ICC T20 World Cup was bowled on Saturday, the frisson of excitement that accompanied the Caribbeans’ epoch-making win in the final five and a half years ago fizzled into a distant memory.

Batting first, West Indies collapsed for 55, its second-lowest T20I score. England stuttered in its response, losing four wickets before getting home in 8.2 overs. Akeal Hosein’s athletic one-handed stunner off his own bowling to dismiss Liam Livingstone was the silver lining for Kieron Pollard’s men.

Earlier, West Indies suffered an early blow when, in the second over, Chris Woakes deceived Evin Lewis with a slower ball and Moeen Ali ran back from mid-off to take the catch over his shoulder. In the next, Moeen accounted for Lendl Simmons, who hit straight to deep midwicket. With two left-handers — Chris Gayle and Shimron Hetmyer — at the crease, Moeen, who opened the bowling, got a third over in the PowerPlay. The move paid off as Hetmyer flat-batted to Eoin Morgan at mid-on.

Gayle started his innings aggressively, driving Woakes through the covers and cutting one past Jason Roy. But he couldn’t maintain the intensity and fell, miscuing a pull off Tymal Mills to Dawid Malan, who ran backwards from midwicket and held on to the ball.

Gayle’s dismissal also bookended the PowerPlay, during which England snaffled four wickets and went for a tad over five an over. Moeen bowled his four overs on the trot, returning figures of two for 17 including a staggering 18 dot balls.

With England making quick inroads, West Indies sent Dwayne Bravo at No. 5. But he was dismissed for a run-a-ball five as Pollard’s men lost half the side for less than 50. Mills, returning to international cricket after four years, had Nicholas Pooran caught behind — his second scalp.

Andre Russell was castled by Adil Rashid for a duck. The leggie then got rid of Pollard and Obed McCoy off successive balls before shattering Ravi Rampaul’s stumps in his next over to finish with remarkable figures of 2.2-0-2-4.

There was ironic cheering from the crowd when West Indies reached 50 in the 13th over. It was that kind of a night for the defending champion.