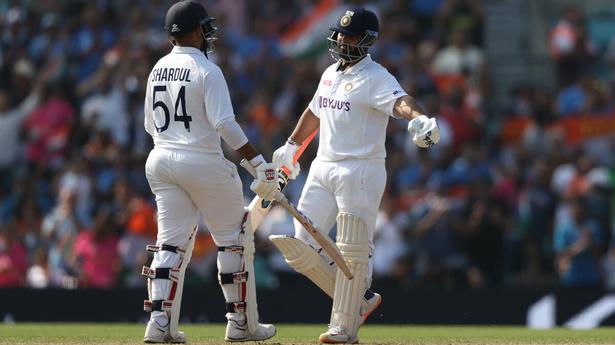 England’s under-fire opening pair made a confident start after an indomitable Shadul Thakur and a calm Rishabh Pant ensured a 367-run lead for India as the fourth Test entered an engrossing home stretch.

With 291 runs out of the target of 368 required on the final day, England would at least fancy a draw if not a victory on the fifth day as the pitch has nothing on offer for the bowlers.

More so, Ravindra Jadeja (0/28 in 13 overs), whose primary skill has been overlooked by the team management, looked pedestrian during the overs that he bowled during the penultimate evening. A few balls did turn but Burns tackled them with ease.

The only bowler who made some impact was Jasprit Bumrah (7-3-11-0), who at least tried to exert some pressure on the openers.

However, India still have their nose ahead in the game largely due to the performance of the lower middle-order where Thakur the batsman exceeded everyone’s expectations with a second half-century in the match.

He was well complemented by Pant, who finally got some runs under his belt showing admirable restraint and sense of responsibility during the duo’s 100-run stand.

Credit should also go to Umesh Yadav (25) and Jasprit Bumrah (24), who also played their cameos in taking the target past 350-run mark.

Had Thakur-Pant not played their part, England would have ended up chasing a lesser total after yet another all-too familiar middle order collapse.

It did help that the pitch became flatter as the day progressed and under bright sunshine, strokeplay became easier for both the batters as they could hit through the line.

While Shardul, who is fondly called ‘Beefy’ by team’s head coach Ravi Shastri for his Ian Botham-like exploits, is reinforcing his value as a bowling all-rounder. His three straight drives were as good as any of the shots that his illustrious seniors Rohit Sharma and Cheteshwar Pujara hit on the third day.

It was sight to behold as he picked an Ollie Robinson (32-7-105-2) slower early and dispatched it over long-on to reach 49 and then a pull shot for a single helped him complete his fifty.

If Shardul’s 57 in the first innings had helped the team reach a respectable total, his approach in the second innings ensured that Pant wasn’t in his usually “harakiri” mode that brought about his downfall during a number of occasions this summer.

The left hander curbed his instincts to charge down the track and played as per merit of each delivery. Only when he was in his 30’s that he lofted Moeen Ali for a one bounce four and in his 40’s charged out to slash James Anderson (33-10-79-1) over covers for a boundary.

His innings had 76 dot balls which showed that he had learnt from his mistakes but he was distraught when he failed to get the elevation, offering a return catch to Moeen (26-0-118-2).

In the first session of the day, Virat Kohli (44, 96 balls) showed promise with his cover drives but a beautiful slider from Moeen saw his back as his forward defensive prod found the outside edge into the slip’s hands.

But amid a good batting performance, what struck like a sore thumb was vice-captain Ajinkya Rahane’s another failure in what were the best batting conditions so far in the series.

Having survived a strong leg before appeal courtesy DRS, Rahane played across the line to a straight delivery from Chris Woakes (30-8-72-2) and his skiper at the other end told him not to review.

The veteran of 78 Tests with another failure is slowly making his place untenable in the playing XI.

We have a strong side, quite confident heading into T20 World Cup, says Virat Kohli 8 min read

We have a strong side, quite confident heading into T20 World Cup, says Virat Kohli

We have a strong side, quite confident heading into T20 World Cup, says Virat Kohli 8 min read

We have a strong side, quite confident heading into T20 World Cup, says Virat Kohli