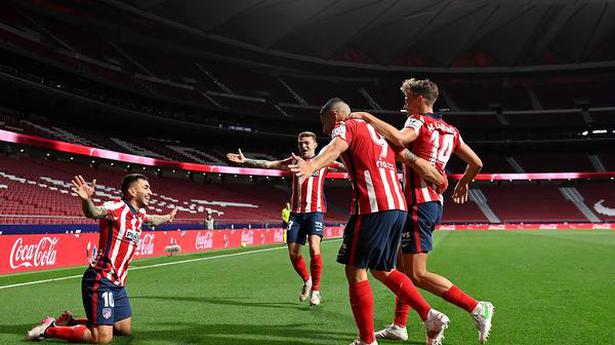 Jorginho howler hurts Chelsea as it loses to Arsenal; Milan goes on the rampage against Torino

With the Spanish league title in sight, Atletico Madrid made sure it didn’t falter.

Diego Simeone’s team moved closer to ending its title drought in Spain with a 2-1 home win against Real Sociedad on Wednesday, taking a major step toward securing its first league trophy since 2014.

“We could hear them,” said Atletico captain Koke, who played his 500th match for the club.

“There are two games left but that’s a lot. Everyone is losing points in this league. We have two finals ahead of us.”

Ante Rebic netted a 12-minute hat-trick in the second half to help AC Milan rout Torino 7-0 in Serie A and strengthen its chances to qualify for the Champions League.

The two are two points above Napoli and three above fifth-place Juventus, which won 3-1 at Sassuolo. There are two rounds remaining in Serie A.

Emile Smith Rowe took advantage of a defensive howler from midfielder Jorginho to score the winner as Arsenal beat Chelsea 1-0 at Stamford Bridge to stop the host from moving third in the Premier League.

It was Arsenal’s third straight Premier League victory and a much-needed morale booster after its loss in the Europa League semifinals left the Gunners without a chance of qualifying for the Champions League.