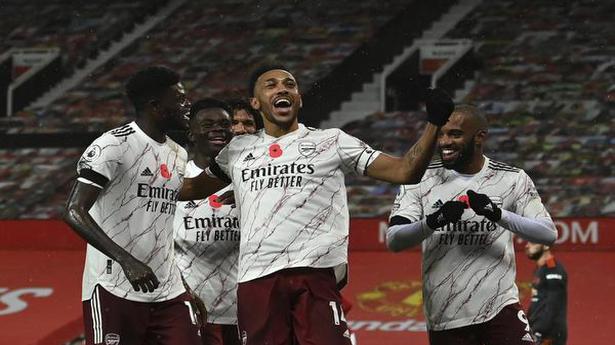 It is Arsenal’s first win for 14 years in a Premier League match at Old Trafford.

Pierre-Emerick Aubameyang scored the only goal of the game from the penalty spot as Arsenal beat hosts Manchester United 1-0 on Sunday to secure its first win for 14 years in a Premier League match at Old Trafford.

With both teams playing a cautious game, a foul by United midfielder Paul Pogba turned out to be decisive when he kicked Hector Bellerin’s foot in the penalty area. Aubameyang sent goalkeeper David De Gea the wrong way with his 69th-minute spot-kick to give Arsenal the lead.

“It’s a bad afternoon. We just gave the ball away too much,” United captain Harry Maguire told Sky Sports. “If you give the ball away as much as we did, especially in the first half, you’re not going to win games of football.”

Arsenal hadn’t beaten United away since an FA Cup game in 2015, part of a longstanding run of poor form for the Gunners when facing England’s biggest clubs on the road. Arsenal’s last win at Old Trafford in an EPL game was in 2006, when Alex Ferguson and Arsene Wenger were the managers and current United manager Ole Gunnar Solskjaer was still playing for the club.

Arsenal had the better chances in a quiet first half Sunday, with Aubameyang narrowly missing a cross at the far post after a mistimed lunge, and Willian brushing the crossbar with a lob. Maguire could have given United the lead in the 55th but his header at a corner went just wide of the left post.

Arsenal needed a slice of luck to cling on to its lead when a mistimed block from Mohamed Elneny bounced off goalkeeper Bernd Leno’s head and onto the post before being cleared.

The defeat leaves United with only seven points from its first six games of the season with fatigue from the extended 2019-20 campaign appearing to play a role.

Arsenal moved closer to the Champions League spots following its first victory in three league games after losses to Manchester City and Leicester.