Saif Ali Khan, Arjun Kapoor, Yami Gautam and Jacqueline Fernandez starrer ‘Bhoot Police’ shoot has begun amid the new normal. The team released the first poster today and updated the fans about its shooting schedule in Dalhousie.
Saif’s wife and actress Kareena Kapoor Khan took to her Instagram handle and cheered for him. Sharing the poster with the fans, Bebo wrote, “The #NewNormal is Paranormal 😉 Good luck guys… kill it ♥️♥️” Have a look:

Now, Sara Ali Khan has also taken to her Instagram story and expressed her excitement for dad’s film. Rooting for Saif, the star kid wrote, “The #newnormal is Paranormal #BhootPolice”. She also put a GIF that says, ‘#1 Dad’. Have a look: 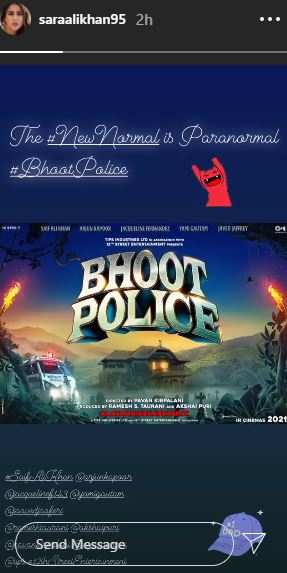 The team of ‘Bhoot Police’ recently jetted off to Dalhousie. They were spotted at the airport before boarding the flight. Earlier speaking about the film, director Pavan Kirpalani told Mumbai Mirror, “We are excited to bring this spooky adventure- comedy and really happy to have Saif and Arjun join the team as they are a perfect fit for this crazy entertainer. Both of them will be seen in very different avatars and will bring their trademark humour to the script.”

Meanwhile, on the work front, Sara will be next seen in ‘Atrangi Re’ with Akshay Kumar and Dhanush. She also has a film with Varun Dhawan.