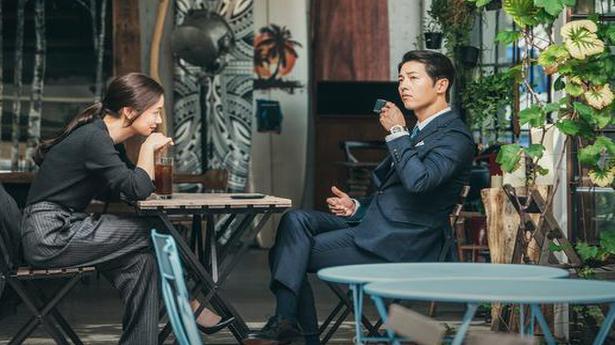 In these rather grim times, the campy and pacy K-drama on Netflix serves as a perfect foil for some distraction

There’s a lot to love in the recently-concluded smash hit K-drama Vincenzo which has become a fan favourite across the world, and has cemented its place amongst the top shows on Netflix for weeks now.

For a show that initially seemed to falter while attempting to balance multiple characters, plotlines and genres, tighter writing from episode eight onwards greatly helped elevate the drama. As Korean-Italian mafia lawyer Vincenzo Cassano (Song Joong-Ki) takes on the chairman of the Babel Group Jang Jun-Woo (Ok Taec-yeon), the clash brings with it a host of revelations and roadblocks. Apart from his partner in law and crime Hong Cha-Young(Jeon Yeo-Been), the bumbling tenants of the decrepit Guemga Plaza aren’t too far behind when it comes to lending the Consigliere a helping hand, all while throwing in some theatrics along the way.

For a show whose initial promos promised a dark, legal-action drama, Vincenzo went above and beyond this all while delving into some dark comedy, slick action and even relationships. While the characterization of Vincenzo emerges as one of the more nuanced aspects of the show, everything around him remains rather one-note. He is shown to take on a system where most characters waste little time in hamming it up about power and violence. The show also goes from dark comedy to grisly noir really quick in the latter half; it would have been nicer to see brain over brawn set the tone for revenge.

Vincenzo’s camaraderie with the array of characters around him also remained a highpoint through the show. While a little less time could have spent initially on the tenets at Guemga Plaza, the fierce loyalty that this builds up to later is rather sweet to watch.

Without divulging much about the multiple twists and several cliffhangers that the writers clearly had a field day with, the show’s strength lies in its pacy writing and excellent leads that carried the show on their shoulders. Vincenzo will probably go down as one of Joong-Ki’s career best roles. It isn’t easy pulling off a grey role advocating ‘merciless justice’ and he rises up to the challenge, complete with a haunting glint in his eyes. Vincenzo’s methods might be shrewd and crafty, but there is also a good measure of grisly violence thrown in as he embarks on a rampage seeking revenge. As characters scramble to get incarcerated and thrown in jail since that’s the safest place to stay away from him, one of them muses, “Embarrassment is momentary, staying alive is important.”

Cha-Young has to be one of the best female characters written in recent times for a K-drama. It truly is a welcome change to see the writers do away with the tropes one has come to associate with a show like, for the female lead; Cha-Young doesn’t need any protecting. She’s just as quick-witted, strong-willed, and always up for a challenge. For a show that places a lot of weight on the male lead, Yeo-Been holds her head high and aces every scene she’s in.

While Ok Taec-Yeon was building up towards a memorable role from the early episodes thanks to his strong screen presence, Kwak Dong-Yeon as Jang Han-Seo emerges as the surprise package in the latter half of the show. Here’s to hoping both the actors soon star as the leads in some solid new dramas. All the over-the-top action and slo-mo shots onscreen is fueled by an amazing soundtrack with Adrenaline by Solar emerging as the standout track.

In these rather grim times, the campy and pacy show serves as a perfect foil for some distraction. Though the episodes definitely are a bit too long, Vincenzo is dramatic entertainment from the get-go.

Vincenzo is currently streaming on Netflix

‘The Mitchells vs. the Machines’ movie review: A sweet, futuristic film with visual verve 4 min read

‘The Mitchells vs. the Machines’ movie review: A sweet, futuristic film with visual verve

‘The Falcon and The Winter Soldier’ review: What does it mean to be Captain America? 4 min read

‘The Falcon and The Winter Soldier’ review: What does it mean to be Captain America?

The Disciple’ movie review: A window into the inner conflicts plaguing an artist, shot artfully