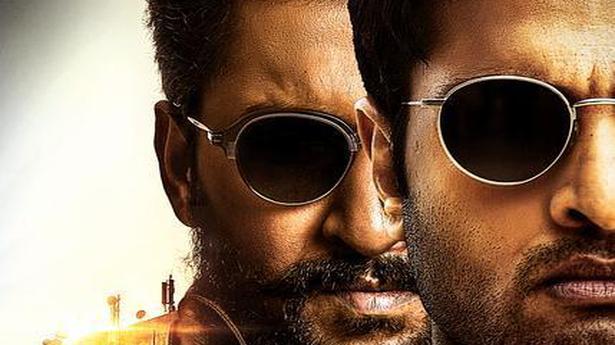 The stylish action thriller has interesting face-offs between Nani and Sudheer Babu, but ends up as old wine in a new bottle

Mohana Krishna Indraganti’s Telugu action thriller V, now streaming on Amazon Prime, begins with a nod to William Shakespeare’s line from The Tempest: ‘At this hour lie at my mercy all mine enemies.’ In some of his previous films too, the writer-director has acknowledged writers/dramatists whom he admires and if in some way, their work has triggered a line of thought for his film. In V, he also mentions some popular cinema — from the Korean action thriller I Saw The Devil to mainstream Telugu films of Raghavendra Rao and Boyapati Srinu.

V was touted as a mainstream action thriller that pays attention to rhyme and reason. It promised interesting face-offs between a cop and a killer on the loose, with whistle-worthy moments that also make sense.

The near brushes between the serial killer (let’s just call him Nani for now) and cop Aditya (Sudheer Babu) set the ball rolling. Aditya is lauded for his work as deputy commissioner of police, West Zone, Hyderabad. He also tops the ‘most desirable man’ list, walks the ramp and flaunts his six-pack abs on a men’s magazine cover. In short, he’s a media darling. The celebratory mood is soon tempered by the gruesome murder of a fellow cop. The killer leaves behind a note and challenges Aditya.

In the scene of the first murder, none of the cops show signs of shock or despair that one among them has been killed. That he is shady emerges later, but the lack of emotion with which the cops try to crack this mystery keeps us too, from being invested.

Sudheer plays the cop with a charming ease, sporting a mild smirk from time to time. Nani looks like he has enjoyed unveiling a dark character. He gets the best lines and his clash with Sudheer would have elicited whistles had this film released in theatres. Nani’s eyes have a tale of grief to share; he looks like he hasn’t laughed heartily in a long time. When he does, the morbid humour comes at the expense of co-passengers who have no idea what hit them.

All this should have ideally built up to an engaging drama as the gruesome murders continue and Sudheer unravels the answers. Instead, the film’s Achilles’ heel is exposed. V is a product of technical finesse with a story that becomes extremely predictable.

The film holds attention during the near brushes between the two men, despite a few aberrations like the knife-toting parents (Rohini and ‘Thalaivasal’ Vijay) of crime writer Apoorva (Nivetha Thomas) whose presence doesn’t add to the narrative. Even Nivetha’s role is a disappointment. Hired as a criminal psychology consultant, she barely gets to do any problem solving.

The film loses steam when it pieces together the story of the killer. A brief love story works as an emotional core of the drama. But the sub-plot that emerges, based on incidents that happened in Hyderabad, brings in a feeling of deja vu. The crime is heinous but you’ve seen similar storylines in several films. The slight twist in the tale towards the end isn’t enough to salvage an old-fashioned plot.

Aditi Rao Hydari has that mix of innocence and vulnerability that suits her short role. Vennela Kishore helps lighten the drama and at one point, takes a clever jibe at comic actors who are newly signed on for big commercial films.

V could have benefited with a far more engaging story. As it stands now, it’s a pale story that doesn’t make you root for its prime characters.