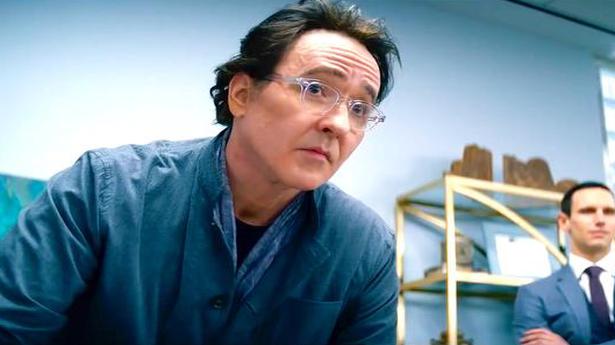 John Cusack makes his digital debut in this conspiracy thriller involving a pandemic, that is too violent for its own good

I think I have earned bad karma from the entertainment gods. Why else would I have to watch dogs being killed, torture involving salt, bleach, a spoon and an eye, nails being peeled off, and cute bunnies being shot?

Even though Gillian Flynn (Gone Girl) adapted Utopia from the 2013 cult British show of the same name, the mentions of viral load, pandemic, fatal flu, PPE and quarantine zones feels horribly real. It is as Dickens would say the best of times and the worst of times for a conspiracy thriller involving a pandemic. The disclaimer at the beginning, “This program is a work of fiction and not based on an actual pandemic or related events,” doesn’t do much to assuage the many “what-ifs” buzzing in one’s head.

Ian (Dan Byrd), Becky (Ashleigh LaThrop), Grant (Javon Walton), Wilson (Desmin Borges) and Samantha (Jessica Rothe) are die-hard fans of a graphic novel called Dystopia. The book tells of a scientist, Hyde, and his daughter Jessica (Sasha Lane), who are captured by evil Mr Rabbit. Hyde is forced to weaponise pathogens, which Mr Rabbit sells around the world to the highest bidder.

The fans chat on message boards and come to the conclusion that Dystopia lists the many diseases that have wreaked havoc on the world, including SARS and Zika. When a young couple find the unpublished manuscript of what looks like a sequel to Dystopia called Utopia, they decide to sell it at Fringe-Con, a comic conference.

The super fans think Utopia will reveal an extinction-level event and clues on how to stop it and head to Fringe-Con to buy the manuscript. Unfortunately, there are all sorts of horrid people also after it, including Jessica who is on the run from Harvest (Mr Rabbit’s minions), and the psychopathic, raisin-loving Arby (Christopher Denham).

While the flu pandemic rages, killing school children, suspicion falls on Dr Kevin Christie (John Cusack). Christie’s labs manufacture and supply Simpro, a mock meat, to schools. There is also Michael Stearns (Rainn Wilson), a virologist, who thinks the flu might be one he studied and created a vaccine for.

If one is able look beyond (it will take some doing) the cold-blooded and almost certainly gratuitous violence, Utopia moves at a frantic pace. There is a lot of inexplicable running and jumping, slicing and dicing in this oddly muddled plot. While there isn’t any humour, the romance between Becky, who suffers from the mysterious Diels disease, and Ian, is sweet. Alice in Wonderland fans might be happy to go down this rabbit hole or they might not what with a gun-toting little girl called Alice (Farrah Mackenzie). Violent and imperilled children are just a few more offensive things about the show.

The cast is fine. Cusack makes his digital debut as Christie and when he demands, “What have you done today to earn your place in this crowded world?” you are terrified of disappointing him with the wrong answer. Rainn Wilson (The Office) has us rooting for Michael, while Sasha Lane is all business as the dreadlocked Jessica — wonder what is in her backpack though apart from the chocolate…

The hyper-violent show, which seems to be a spiritual sibling to Amazon’s The Boys, ends Season 1 on the mandatory cliffhanger. Hopefully season 2, will have a clearer plot and a lower body count — or is that too much to ask for?

Review of Chandresh Narayanan’s 75 Years of Indian Sports — Game, Guts, Glory: As the millennium turned, so did India’s sporting fortunes