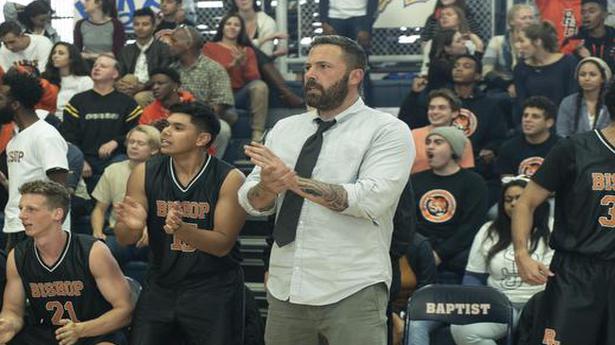 Playing a high school basketball star who walked away from the game for a heart-breaking reason, Affleck creates a lived-in character

That one-line plot tells everything and nothing about this film. Yes, it is a sports film following the oft-repeated tale of the underdog triumphing over the favourites. It is the story of an alcoholic who has hit rock-bottom getting a chance at redemption. It is the story of youngsters from tough homes getting a chance to succeed. All of which is inspiring and thrilling if predictable.

What elevates this movie directed by Gavin O’ Connor, his second collaboration with Ben Affleck after The Accountant, is Affleck’s bravura performance. Playing Jack Cunningham, a high school basketball star who walked away from the game for a heart-breaking reason, Affleck creates a lived-in character.

The movie opens with Cunningham working at a construction site with cans of beer as his constant companion. Father Devine, from his old school, Bishop Hayes, asks him to fill in for the head coach of the basketball team, who had a heart attack. The team is not a great one and though Cunningham is initially reluctant to take up the assignment, he instils pride and discipline in the team, shepherding the players to the playoffs.

Through the movie, we learn that Cunningham is using alcohol to numb his grief at the loss of a loved one. The route to redemption is littered with good intentions, triggers and relapses. And we see all of Cunningham’s struggles thanks to Affleck’s performance—wading through a rack of beer cans as he plays his rejection of Devine’s offer in his head is just one example. Cunningham is a charismatic and flawed character and as much as we are rooting for Bishop Hayes, we are also rooting for Cunningham to get his life on track.

Incidentally, it is nice that for once the Catholic Church is not in the middle of a scandal or running some secret cult of scary assassins. The rest of the cast is quietly effective, matching Affleck’s performance beat for beat. Michaela Watkins plays Beth, Cunningham’s sister, Janina Gavankar is Angela, Cunningham’s estranged wife, and comedian Al Madrigal plays algebra teacher and assistant coach Dan.

The movie was released in the US in March but could not complete its theatrical run as cinemas were shut down because of COVID-19. Like Honey Boy where Shia LaBeouf’s script was part of his therapy in rehab, Affleck’s performance is shaped by his struggles with alcoholism — which accounts for its bone-shearing honesty.

With its positive reinforcement, The Way Back is a perfect movie to watch in a locked-down world.

The Way Back streams on Amazon Prime Video